It used to be that the trip to and from Jerusalem-Shiloh, even by bus was barely an hour. And that was when we went through Ramalla and some chareidi neighborhoods in Jerusalem. So, you'd think that today, almost forty years later, after modern bypass roads have been built and highways in Jerusalem, plus the permitted speed has been raised, the trip would be much faster. It isn't. We are plagued by traffic jams.

When I make it to Jerusalem by bus in an hour, I'm in total shock. When it happens, it's either mid-morning or very late at night. The photo below was taken 6:05 PM last Thursday. That's the exact time according to my phone/file info. 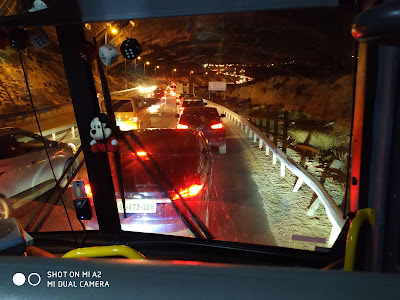 As crowded and "jammed" as the traffic was going to Jerusalem, reports on the traffic jam whatsapp group indicated that there were much longer delays in the opposite direction. Every weekday morning reports come in from travelers sitting in traffic jams as early as 6:05-6:15 am before and after Adam going to Jerusalem. Those trying to drive/ride out of Beit El have it much worse. It is frequently a half hour wait among mostly Arab cars just to get to Highway 60 aka Derech Avot, the north/south road to Jerusalem to the South and Shiloh/Tapuach Junction to the north.

Givat Asaf, the Beit El Junction is being redone, and very soon a right-turn lane will be opened, so that the traffic jams at that T-junction should be reduced by a lot.

The Adam Junction, where many of our traffic jams originate, is also being redone. There will be a tunnel, so the traffic between Binyamin/Shomron and Jerusalem will bypass Adam and the Road to Ramalla.

There is also work widening the road south of Adam, towards Jerusalem, because that's another area that gets overfull.

Of course, these are the problems of the "rich," the fact that none of the city/road planners ever expected that so many people would be living in Binyamin-Samaria. They didn't expect industrial zones and shopping malls. Not only has the Jewish population been booming here, but Arabs have been moving here too. Many of them work with and for Jews.

Ironically, the traffic jams on the road to and from Jerusalem have caused something good in the Shiloh-Eli area. People quickly discovered that we are just as close to, or closer to the Rosh Haayin/Petach Tikva/Hod Hasharon area, besides being a ten minute drive to the Ariel University. Government offices and shopping opportunities abound in Ariel, and if you need something larger, you can get to nearby cities without suffering all those long annoying time-wasting traffic jams.

More and more neighbors have discovered that if they go east, to the Alon Road, they can work in the Bikaah, Jordan Valley. Even Beit She'an is more accessible than Jerusalem.

Shiloh is the true merkaz ha'Aretz, center of the Land of Israel.
Posted by Batya at November 05, 2018