Israel, The Holyland, is Not Europe 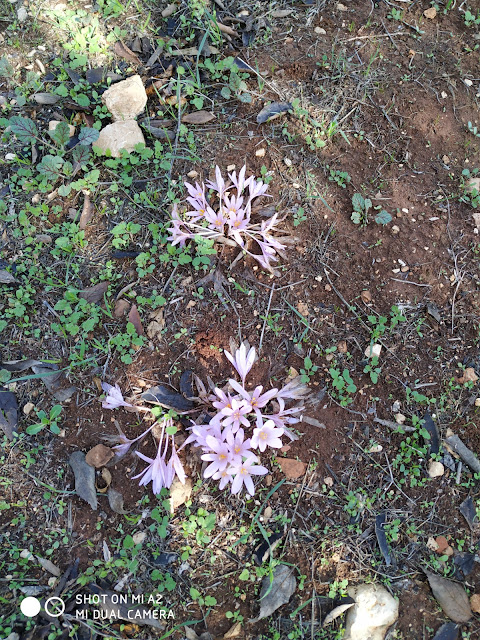 So far, so god. The early winter crocus flowers are blooming. They are the signs that water has seeped into the ground, and winter has begun here in the Holyland.

Quite a few decades ago, I took a course to improve my Hebrew. One thing I got out of it was the fact that the early Hebrew writers here couldn't get European seasons out of their brains. They continued to refer to the "first buds of spring" and other such literary images that aren't part of the Holyland reality. New York, where I grew up, and most of North America is very much like Europe. The winter is dark and snowy. You don't see the "buds" and flowers until spring. Then it all blooms and continues throughout the summer.

Here in the Holyland, it rains only in the winter. By early-mid summer, unless you irrigate your garden, everything just dries up. Many people try to imitate, recreate the gardens of Europe or North America. It's a waste of water and distorts perception of the Israeli climate.

Israel begins to green in early winter, after the first few rains. Winter flowers start blooming, too. By the end of winter the ground is covered with wildflowers and greenery. As the weather heats up in the spring, and the rain ceases to fall, the flowers dry up and die.

In addition, oranges, which since the middle of the twentieth century are a staple of Israeli agriculture, only get sweet (fully ripe) after the first rains.

Chazal, our sages, teach us that the quantity and quality of rain are dependent on how well we Jews keep the mitzvot and treasure the Holyland. Gd willing, we will deserve rains of blessing.
Posted by Batya at November 22, 2018

“…Zecharia, like so many of his contemporaries,
worked for a time in a sweatshop.

The shop he worked in, making pocketbooks,
was located in a building just east of
Washington Square [in Manhattan], site of
the ill-fated Triangle Shirtwaist Company.

On the Saturday of the great fire in
[March 25,] 1911 [CE] that engulfed the
building and killed 145 workers, Reb Zecharia
was at home. It was the Jewish Sabbath.

He learned two lessons from this:
he vowed that his children would never
become factory workers and he vowed that
they would never work on the Sabbath.”

Zecharia Derschowitz moved from Galicia
to the USA in 1888 CE. He was the
great-grandfather of Harvard Law
Professor Alan M. Dershowitz.

He said this about Orthodox Judaism,
many years after he quit it:

“I cannot leave my progeny any legacy
comparable to the Orthodox commitment to,
and intimate knowledge of, Jewish tradition
and practice that my predecessors left me.

Though I have not abandoned my Jewishness
– far from it – I have also not carried on
the tradition of daily religious observance
and total immersion in the sources of
the tradition.

Sometimes I regret not having done so.”

When we were growing up, my friends and I would
take great pride in discovering the Jewish sources
of American laws, such as: the privilege against
self-incrimination, the requirement of two witnesses
for certain types of crime, and the very idea that
punishment must be proportionate to the crime committed.”

To be honest, more and more are celebrating Thanksgiving. Decades ago it was unheard of completely.

In America, fewer and fewer Orthodox Jews are celebrating Thanksgiving. When I was a child (attending an Orthodox day school) we had off. Now some schools give off a half day or, here in Brooklyn, not at all.

Interesting, because here in Israel celebrating in some way or another is getting more common.