Even though the Israeli media and "world public opinion" insist on labeling our Prime Minister as "Right," the truth is that his policies are far to the Left of the Israeli political spectrum. I can easily admit that he can give a great speech, which even echoes the basic principles of what's considered Right policies. But the truth is in actions and not words. And when it comes to actions, or policies, there's nothing Right about Prime Minister Binyamin Bibi Netanyahu.

Here in 21st Century Israel the key to judging/measuring Right/Left on the political spectrum is one's policies and attitude to the Land of Israel, statehood and sovereignty.  In a nutshell that means that if someone is in favor of Jews living, building and being sovereign in the Land of Israel, ignoring the 1949 Armistice lines, then he/she is on the Right. If one sees a legal holiness or eternal permanence in those lines and consider them as a border between an "Israel of all its citizens" and a judenrein apartheid Arab state called "Palestine" or "West Bank of Jordan," then he/she is on the Left.

Bibi is a pretty smooth speaker and could have been a hell of a used car salesman, but we've heard his lies a few times too often. Those "like new" cars are lemons with doctored records.

While Bibi keeps on touting the hundreds of Jewish homes he has approved for building, they are the same ones that were approved years ago but never built.  Bibi doesn't play those games with the Arabs. They have a new city called Rawabi, and now even on land that was supposed to be for Jewish only building, Jews can't get permits but Arabs can:

I'm not being paranoid!

Why are we Jews being held back? Why hasn't the new Amona been brought here? 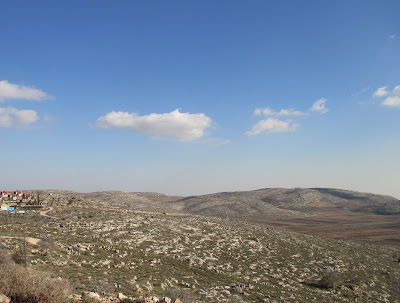 Bibi has promised that a new community will be built southeast of Shiloh. There will be special "incentives" for the Amona community, and it will also be open for other Jewish families. We are waiting. Words won't help. We want action!
Posted by Batya at 1:19:00 PM

How can we expect a man who gives up Chevron to be concerned about the Land or even Jews. I lost all respect for the man from that point on.

I suspect he basks in the accolades given him by the right in the US. I wonder how many of his decisions are based upon that. His actions make him look like a puppet of US policies. For all this I see him as a Bill Clinton clone.

Agree with Shabarno. Even saying the words 'giving away' any land in Eretz Hakodesh is blasphemous.

Yes, you're all correct.