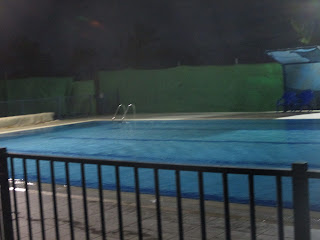 It's rather amazing what we can all get used to. A couple of weeks ago the local Shiloh Swimming Pool opened, and I was one of the hardier, more daing women to go swimming on those very first days when the water was freezing cold. Yes, the water was cold, and even we thought we were crazy.

Three of showed up the first night it was open, Women's Hours, when not only weren't there any little kids making noise, but the sun wasn't shining either. It was dark and cold.

The only concession I made to the weather was to climb in by ladder, instead of a big body-shocking jump. 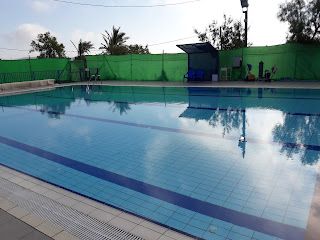 I decided that considering my age, maybe a big jump wouldn't be a very good idea.

And the next morning, we all showed up again.

Even though the sun was shining, I decided to be cautious. It was a good move. As strong as the sun was, it was no match for the cold water.

But the cold water didn't force us out. We kept on moving, and our bodies quickly adjusted.

We really don't know what lies beneath the water, and we certainly can't guess the temperature just by looking.

The water is a lot like people. We tend to judge it by wishful thinking. We frequently read into people what we want them to be. That can cause a lot of trouble.

Water reflects more than images. What happens at the pool is a reflection of the community. Suddenly this year, more than ever before, the other swimmers seem to terribly young. And when I look around I realize that I'm the oldest person in the pool.

It used to be that Women's Hours were more Middle-aged, rather than eighteen plus. But now it seems that even those who have barely finished high school prefer the quiet and peaceful adult swim time. In the past, we'd only see the younger women if they were in training to pass the swimming part of the lifeguard test.

Shiloh and the surrounding communities  are getting younger, thank Gd. There are more preschools opening up. Many young families are attracted to living here for the convenient location, good schools and basic services, such as clinics, stores and of course the pool. 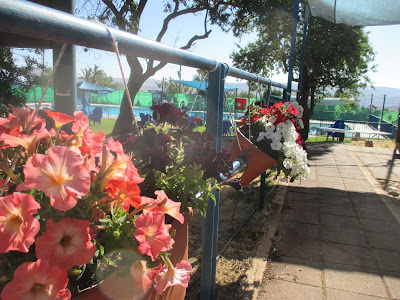 Ancient Roman historians connected
Jews with the Land of Israel:

Many decades ago I did a course to become an assistant lifeguard... You were right not to jump into the cold pool... It's not unknown for people who do that to suffer a heart attack due to the shock... Obviously, age and general physical condition play a role in this too...

Using the ladder, however, is not the correct way to avoid this... The correct way is to do a mild warm-up outside of the pool... Swimming is one of the few sports which one can engage in without doing a warm-up and/or stretching... Which is why you'll rarely if ever see swimmers do this... The exception is when one swims in relatively cold water...