Preview of New Museum in Jerusalem

Yesterday we were given a preview of a new museum in the Old City of Jerusalem. It's located in the building where we had first lived when we came to Israel, the Maon Betar, which is now used by Yeshivat Netiv Arye as a dormitory, on the corner Rechov Hayehudim and Rechov Plugat Hakotel, (Kotel Patrol Street.)

The street is called Plugat Hakotel in honor of the group that was headquartered there during the period of Arab violence against Jews which British Mandate Police didn't stop before the establishment of the State of Israel. 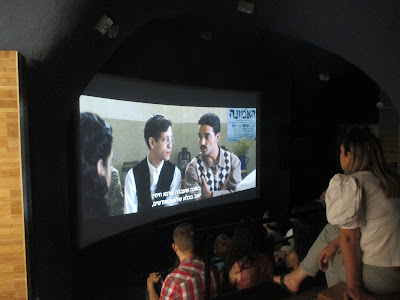 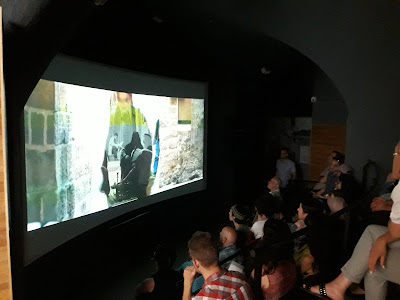 We got to see the movie that will be the highlight of museum. It tells of a young European immigrant to the Land of Israel. This young man came from a secular Jewish home but was attracted to living in the Jewish Holy Land.

He ends up joining the Kotel Patrol, which is challenged with defying the British pro-Arab ruling that forbade blowing the shofar at the Kotel. Any Jew who even attempted to bring a shofar to the Jewish Holy Site would be arrested, and the punishment for blowing it was worse.

The group is taught how to blow a shofar, which is a lot more difficult than you would think. But the biggest problem was smuggling one into the very small Kotel area, which was guarded and patrolled by the anti-Jewish and anti-Zionist British Mandate Soldiers/Police.

When we lived in that building, one of our neighbors was Rav Moshe Tzvi Segal whose claim to fame was blowing the shofar at the end of Yom Kippur. So for us, the movie had a lot of personal significance even though the movie character who manages against all odds to blow the shofar was nothing like our dear friend.

The movie is nicely made and conceived. Gd willing, I'll provide more information on the museum when it opens to the general public.
Posted by Batya at June 19, 2017

The Plugat HaKotel operated between 1937-1938. It was closed on order of the High Commissioner.

Do not forget to mention that during the
British Mandate era, Jews were actually
arrested for blowing shofar at the kotel!

Is it clear now?