This past Shabbat twas the Torah Portion Korach, Korach: Numbers 16:1 - 18:32. Korach was one of the most notorious rebels in the Chumash, the First Five Books of the Bible. He tried to mastermind a rebellion against Gd, claiming that he was rebelling against Moses.

Korach gathered other tribal leaders, who felt that they had lost out on leadership positions. Of course, looking at it from our perspective, we know that if they had managed to depose Moses, then they would have ended up fighting among themselves for top job.

At the Shabbat meal at a neighbor I got into a very interesting discussion which ended up putting Korach in a slightly different light.

My neighbor suggested remembering the previous Torah Portion, Shlach, and then try to understand Korach in that context. It suddenly hit me that Korach, as a Levi, wasn't part of the great "Pilot Trip" by the tribal leaders to stake out portions of the Land of Israel. Levi wasn't going to get any Land. Joseph's two sons were each counted as if a son of Jacob, making twelve if the tribe of Levi was left out. That meant that in the crucial "vote" which was a rebellious ten against two resulting in a forty year delay to for entering the Land of Israel, Korach didn't have a vote.

As a Levi, Korach not only had no tribal portion, no vote, and in addition he'd also die along with the rest of his peers. My neighbor reminded us that the Levi tribe also had more gold and silver, which were useless in the wilderness. The other tribes had wasted theirs when making the sinful Golden Calf.

Yes, it's pretty easy to see why Korach wasn't a happy camper.


In order to galvanize the people to join him, Korach distorted and connived. He falsified the source of the division of labor of the Tribe of Levi, claiming that it was Moses, not Gd, who had assigned the roles of the Levi Tribe. Korach left Gd out of the argument, and he managed to get the support of others who weren't happy with their share of power.

Korach did his best to speak as if he was an expert in Judaism of the time. He reminds me of the Jewish Leftists who insist that their Liberal Western ideology is Judaism and that we who do live as Torah Jews go against Jewish Morality and Values.

Unlike in modern, western culture, values and judgments, Korach's psychological state was of no concern to Gd. When Gd commands, it's an absolute, not open to negotiations. Korach wasn't jailed or isolated. He wasn't given a "timeout," a chance to "think about his mistake." Korach and his followers were immediately executed, swallowed up by the earth, so there couldn't be a grave or memorial. Gd made it 100% clear that certain crimes/criminals can't be forgiven. Such a rebellion against Gd could not be "undone" by Tshuva, Repentance.

What will Gd do to today's Korach? 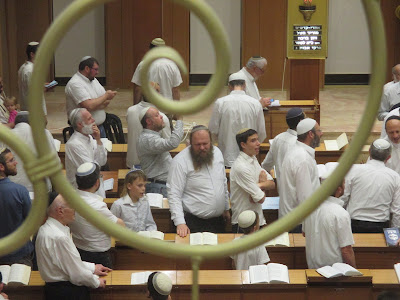 Email ThisBlogThis!Share to TwitterShare to FacebookShare to Pinterest
Labels: Korach, Torah Portion of the Week

The question should be "What will Korach do today against God?". Today's Korach will argue against God's choice, just like the Korach of Old did. So who is this Korach? The Baal Shem Tov gives us a clue, "Those who will hinder the geulah!". Who is then God's choice, the one missing sign that 44 failed messiahs lacked, thundering from the heavens, an unnatural sign of nature has taken place.

I'd say that today's "Women of the Wall" are very much like Korach.