It's no real surprise that there is chaos and anarchy in the White House. There's a simple reason. The United States Government is being run by total amateurs to the political system. This is the first time that a president was elected with absolutely no government or military background, especially one who didn't owe any favors to the political establishment of either party.

Trump made it on his own, because in the 21st Century Primaries System for electing a party nominee, anyone can run for the United States Presidency. And Donald Trump has proven that anyone can win. Trump's national popularity was as a reality TV star, who knew what people wanted to hear but didn't have the power to say it publicly. He honed in on this talent and was greatly amused to discover that his most outrageous statements as a wannabe candidate gave him oodles of free publicity, since the news stations and talk shows quickly discovered that by interviewing Trump or having him as the subject of discussion, even totally negative, got them sky high viewer ratings. And that brought them money.

Consider that although the other Republican wannabes included another Bush-dynasty candidate with the charisma of an over-boiled potato, some sincere though colorless Republican politicians and a retired Black surgeon who not only added color but was pretty popular, it was no surprise that Trump won the nomination.

It wasn't a great surprise that Trump beat Hillary Clinton who promised Americans their worst nightmare come true. And, no, it had nothing to do with her being female. Those who try to raise their families with old-fashioned Family Values actually preferred Trump's locker room gutter/sexist talk to the newfangled Rainbow and families Hillary and the Democrats are now promising. And then she totally sealed her political coffin by calling Trump supporters "deplorables."

So, Donald Trump, whose only experience with politicians was getting his real estate projects approved suddenly had a whole country to run and thousands of jobs to fill and absolutely no idea of how to do it. Add to that, he and his trusted staff just don't know suitable people for these jobs. And instead of handing it over to his Vice President, who at least is an experienced politician, he assigned the job to his older daughter and her husband. Ivanka and Jared Kushner may be a lot more pleasant and photogenic than The Donald, but their political experience isn't any greater.

It certainly isn't helping that the blatantly anti-Trump media has triggered severe paranoia from POTUS and his family.

I expect more anarchy and chaos until whoever wins the 2020 Elections takes charge. In all honesty, I think that the old method of choosing nominees by political powerhouses brought in better, more qualified and experienced office holders. And in those days it wasn't so impossibly expensive to run for the presidency.  A wannabe spent 4-10 years doing favors, campaigning for others to develop a national following and getting to know the country, while Americans got to know the ambitious politician. 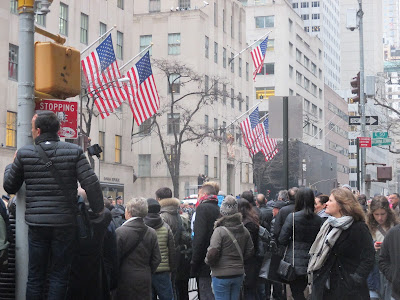 "This is the first time that a president
was elected with absolutely no government
or military background..."

I am not sure how true that statement is.

President Trump’s predecessor, “President”
Obama, had no military background and less-
than-one-year of experience in government,
as a senator. And he was not even pro-American!

Considering the very numerous governments
that are enemies of Israel and enemies of Jews
and enemies of Judaism, I choose to NOT CRITICIZE
one the extremely-rare government leaders
who embodies the opposite qualities. Thank you.

Agree with Mr. Cohen. Would you have wanted the alternative, c'v? He will yet turn out much better than you think. He was vindicated now with this whole smear campaign. We must remember that lev melachim v'sarim b'yad Hashem!

Never ever have I said I wanted any of the alternatives. I don't even feel worried by the anarchy. But Trump is in over his head.
Obama had little experience, but he was/is controlled by people in the system and was/is protected by powerful people, so the government ran smoothly.

I would put it like this; what most people view of public matters is almost solely based upon a media image. What is more influential is the visual media. That media can impart an emotional response whereas the written cannot convey an emotion nearly as well.

One thing IS for certain and that is the media has become more and more hyper-partisan. I've noticed it to have been a gradual process over the years. But their distortions are being disclosed for all to see. For example the latest is the CNNI example of showing the UK Muslim staged event. The first video that came out could have been interpreted favorably to CNNI. But a second has surfaced that has uncovered how staged it truly was.

Recently I have been making the point this same media, out of hyper-partisanship, has resorted to such tactics as to qualify being little different than leaders of terrorist organizations. They have been instigating and perpetuating a narrative so as to foment a backlash of hate against the man. Their tactics are breathless in scope which culminated into an ISIS inspired scene scripted by Kathy Griffin. I see NO difference in terror organizations promoting a hate ideology and the tactics used currently by the media. It goes so far as this same media giving cover to Antifa riots and violence.

I lay much of the blame on schools of journalism. One should ask the question. WHY is there even a "Course" for journalism. This is a recent course that would have been laughed out of existence not so long ago. It would have been asked, you need a course to write down events that occurred. It cannot be to hone writing skills as many who do write cannot do so fluently. Many are poorly structured and have a lack of critical thinking.

From a personal perspective I have interacted with "journalists". A local radio program has two hosts, male and female, who have degrees in journalism. The lack of critical thinking by these two, and the sophomoric approach to many ideas caused me to wonder what they DO teach in journalism classes.

I have watched a great many of the Sean Spicer press briefings and that should be the subject matter of press analysis. It is either their hatred of the administration, Or, the result of sheer stupidity. When a person cannot understand the simple declaration that a health insurance plan doesn't necessarily equate to "medical care" it makes a person wonder whether that person is even capable of understanding the spoken word.

What I Have realized with these briefings, and other interactions with the administration, is they are nothing more than a desire to create a conflict message. The reporter then gives his report on the network and only reports that conflict message. When this is done on a wholesale scale and excludes all else it relays a message to the public of hatred for the administration. Therefore the media defines the perspectives of the public but this May be changing as more and more are becoming disgusted with this media.

Yes, you are so right. I'm finding it impossible to listen to the news. It used to be that Israeli news was colored, but now I think others, like BBC are much worse.

Given the current situation I have begun taking a critical look at the media, whether news Or entertainment. I started to wonder and thus analyze How it is we have gotten to this point.

Some time ago I began to notice entertainment on the public airwaves had taken a decidedly disgusting turn. There is a saying, "What one generates the next generation will embrace" and we have also heard many say they want to "push the envelope". So they are fulfilling the premise.

By this measure we must look at the origins of where we have come. Upon examining the "Golden years of television" what do we find. It was Actually the beginning of what we are confronted with now. At that time how Many shows had the parental character being a "single-parent". One of the most notable and highlighted as best in entertainment of that time was the Andy Griffith show. He was the epitome of the single parent. Along with that was Bonanza, My Three Sons, Beverly Hillbillies, the Real McCoys started out as a single parent, Petticoat Junction and many more. Along with that were the many many more shows that had men dressing as women.

THAT was the beginning. From there it deteriorated to an all out assault on the family structure in the 70's and continued the decline to this day. I fell into the trap of entertainment as being benign. When people are unaware of this destruction they are apt to conceptualize it in their own lives.

It is fascinating how those in entertainment fail to accept any responsibility in what they have produced. It's as if what a person engages their mind to watch or read has no effect on their thinking and personality. Rational thinking would accept that it has a definite affect and influences the person.

I have noted to many, and the response was utter silence, about the violence in entertainment. During the 70's there was a significant increase in gratuitous violence. During the following years it became more and more realistic to the point it was indistinguishable from reality.

It says in Tehillim that Hashem abhors violence. Does anyone believe that Hashem would be content with entertainment violence. What we are NOW faced with is violence from terrorists that have mimicked the violence on the big screen. Certainly no one wants to correlate the two. We could assume that Hashem would say if you want to "watch" realistic atrocities I will bring it upon you, whether completely realistic knife attacks to beheading videos.

Rav Kessin made the statement, somewhat in passing, that Hashem wants to destroy the media. It looks more and more like this may be the goal and purpose. From its inception the media, news and entertainment, have been the main culprit in the destruction of societies. It is a medium that Has to be purified and its destruction is the only recourse. I could say much about the Jewish involvement in these enterprises and how I cringe when Jews are identified being part of the enterprise and given accolades.

Agree, of course, the media is 'completely' partisan everywhere and all to the "left". It's all part of the global agenda.

Sharbano, good points. and remember all of the police chiefs who were Black pre-Obama.
That was a preparation, too.
a, yes, of course