The Utter Irony of Shiloh for a Relocated Amona

Before I go any further, I'd like to make it super clear that I am 1,000% and more opposed to the destruction of any home in Amona, Migron or any other Jewish community. I also think that these Leftist nuisance cases against Jewish homes which magnify and distort possible Arab ownership of land based on vague hearsay should be thrown out of court.

Amona is a lovely rural-like community next to Ofra. A few years ago, it underwent a horrendous trauma when the government destroyed nine homes, and in the process sent in riot police who brutally injured hundreds of protesters. 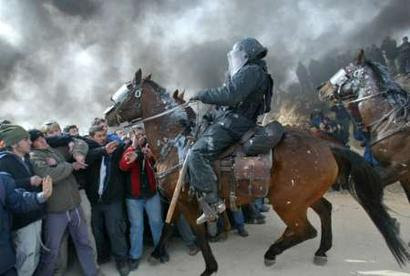 Nobody wants to see this ever again, and nobody trusts the Israeli Government to do what's best for the Jewish People and the State of Israel.

One of Moshe Ya'alon's ideas before being booted out of the position of Defense Minister was to build a "new Amona" in Gush Shiloh (the Shiloh Bloq,) east of Shvut Rachel.

Why do I see this as ironic?

There's a little known fact in the history of the "settlement movement." Ofra is the most veteran Jewish community in the mountains north of Jerusalem. (Immediately after the Six Days War, the government established a number of agricultural moshavim in the Jordan Valley.) Ofra was established by Gush Emunim in spring, 1975 after finally getting approval from the government and support from Shimon Peres. But the location that group of pioneering families was forced to accept as their only chance, was not the one they originally wanted. They davka wanted to establish that first Jewish community in Shiloh! For historic and symbolic reasons, they considered Shiloh to be the obvious choice, because Shiloh was the first Capital of the Jewish People after Joshua led us into the Holy Land.

But Shimon Peres rejected Shiloh as a potential settlement site. Peres would only allow Jews to live where there was already a "proper building," an abandoned Mandate or Jordanian army barracks/police station, and the area which became Ofra had that. In Shiloh there were some old stone churches and a possible synagogue, but nothing "modern enough."

I think that Peres had thought that a location with a relatively modern building wouldn't require much effort/investment and then would be easier to disassemble, because he really didn't think the Jews would remain there very long. The Jewish demonstrators/settlers would live in tents and trailers aka caravans which were to be trucked in and then trucked out, or so he had hoped. The barracks would be the communal structure, so the "settlement" wouldn't cost much. Gush Emunim then searched Judea and Samaria for empty barracks around which to establish communities, according to Shimon Peres's instructions. And the early yishuvim did have such barracks.

Here we are over forty years later, and there's a massive presence of Jews living peacefully in Judea, Benjamin and Samaria. There would be even more if the government would approve the requested building plans.

The reason why the proposed location for the "new Amona" is near Shiloh and not near Ofra is because there is very little public state land in the Ofra area. Ofra is getting "full," and some of the most recent housing projects are in former orchards, which had been farmed by residents.

Davka, Shiloh, as had been explained to us in one of our earliest visits is between the two main Arab cities, Shechem and Ramallah, far from both. That means that there is a lot of state land availble for Jewish communities. So, if the families who had established that first community had been allowed to make it in Shiloh, things would have been so different. There would have been plenty of room for growth.

Amona wasn't a mistake, but the Israeli Government is making a mistake by trying to destroy it.