The Day Jimmy Carter Saved the Jews from Mike Evans 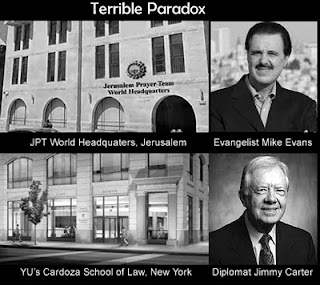 Jewishisrael is no friend of Jimmy Carter. Yet in the aftermath of this month's brouhaha over the incongruous decision by the editors of Cardoza Law School’s Journal of Conflict Resolution to honor the former president, JewishIsrael felt it timely to recount an episode also plagued with absurdity which still has serious repercussions for both Israeli and Diaspora Jewry.

In 1978, President Jimmy Carter, under pressure from the American Jewish community, intervened to save countless numbers of Jewish youth from Christian missionary Mike Evans, who was effectively working to "save" [sic] as many young Jewish souls as possible.

This report is no parody, but it is a terrible paradox, as both Evans and Carter have caused irreparable damage to Am Yisrael, but now find themselves being acclaimed by leading American Jewish and Israeli institutions. How the Jewish community got to this absurd juncture is worth exploration…more

Ellen, thanks so much for posting this!!