Arab Terrorists Attack Eliat; No One is Immune

I've been blogging about that horrid, cruel deadly attack on the Boston Marathon.  Please don't think I consider Israel immune from such things.  Arab terrorists in the Sinai launched rockets at the southern city of Eilat today.


Two rockets were fired at southern Israel's city of Eilat from the Sinai Peninsula this morning (Wednesday, April 17).


We shouldn't think the rockets as harmless, just because there was minimal damage.


At least two Grad rockets fired from the Sinai area hit Israel's southernmost city of Eilat on Wednesday morning, causing no injuries but some damage.
An Islamist militant group in the Sinai Peninsula Magles Shoura al-Mujahadin claimed responsibility for the attack on its website on Wednesday saying it targeted Eilat with two Grad missiles and then withdrew safely. (Jerusalem Post)


The Sinai was once the buffer zone for Israel, when we had control of it, from the end of the 1967 Six Days War until then Prime Minister Menachem Begin decided to give it back to Egypt.  Now, especially considering the chaos in Egypt, there's nobody to keep the peace in the Sinai.  It's just the place for Arab terrorism to fester, because it's mostly empty and has a long coastline. 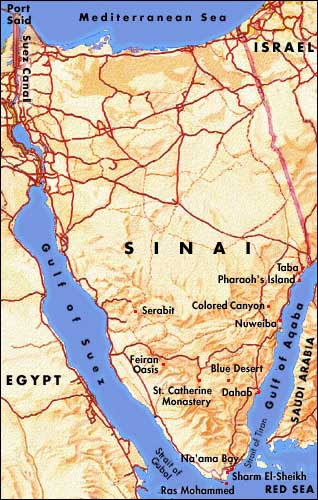 There are no better defense than land and G-d to be perfectly honest.  Land makes it more difficult for enemies to get close, and G-d makes the missile or bullet fall harmlessly.  And don't forget, we can't count on G-d to always make the enemy miss.

Israel's victories are not due to superior weapons or soldiers.  We have defeated our enemies, even when we had insufficient arms.  And no doubt you can easily list militarily strong and advanced countries that have lost wars.  There's also a matter of soldiers' motivation, and there's also that secret, uncontrollable factor which is very involved in Israel's wars.  That's the Yad Elokim, The Hand of G-d.  We must never take for granted that G-d will always save us.  We must make our efforts, and like with "matching funds" if we give, so will G-d.
Posted by Batya at April 17, 2013

I agree Batya, if we give of ourselves, if we can meet Gpd even half way, or near it- points for effort, HE will come through. We do have to take the initiative, He is ready and waiting for us. We should take the Sinai back, big mistake, and Gaza, and the Temple Mount. These actions are proven to have made the Jewish people less secure, less respected and more prone to attack. Faith and more faith is key- absence of fear in speaking out for what is truth and justice.

Deborah, if it was only so easy just to "take back' what was foolishly given away...