This Year We Were In Jerusalem!

Yes, we were in Jerusalem for the "weekend," Shabbat and first day Passover, including the seder.

Since our married daughter was going to her mother-in-law's, two children couldn't come home from the states, and our son couldn't come to us, I decided that we'd go to him. Of course I wasn't quite sure how all of those concerned would react, but I must have marketed it well, and they all agreed. 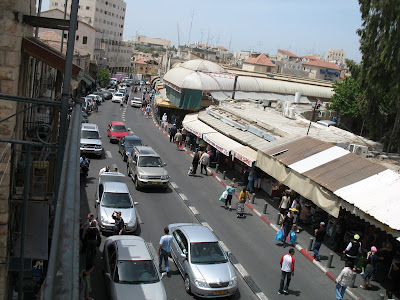 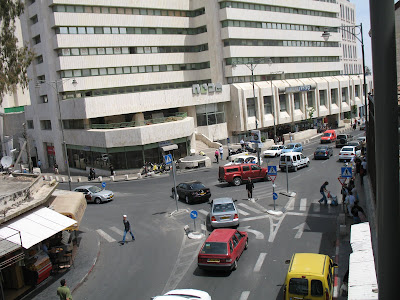 So, off to Jerusalem we went. It wasn't quite that simple. I had to change the kitchen to Passover-mode early, in order to cook and freeze the food.

Of course, I couldn't have photographed the Jerusalem we saw on Shabbat and HolyDay, so you'll have to just imagine how it was from these pre-HolyDay shots. 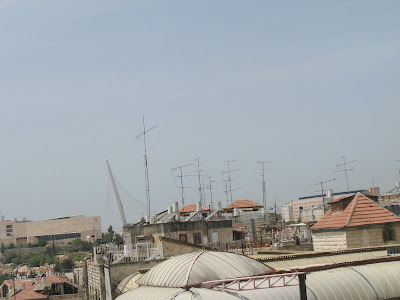 Yes, this is the neighborhood we were in, Nachlaot, Machane Yehuda market, Jerusalem. It has a Shiloh Street, and Shiloh has a neighborhood called Nachlaot, but that's where the similarity ends.

Business was booming Friday, when I arrived early enough to help my son finish the cooking. You'd think it wasn't the 21st Century, when most people drive their cars to megamarkets. Since there was still almost a full day left when chametz was permitted to be eaten, you could still buy freshly baked cakes, cookies, bourekas and even challot for Shabbat. Neighboring stores and stalls sold Kosher for Passover baked goods of the strictest standards. There were long lines at the wine stores and at the felafel kiosks, too. And of course, people were still buying fruit, vegetables, meat and fish. There was lots to cook.

It was one of my most relaxed Fridays, considering that I had done most of the cooking at home, and as a guest, I wasn't responsible for the cleaning. My most important job was to make the kneidelach, but not in the soup, since we couldn't have them before Passover. And I also had to turn the frozen chicken soup stock into a delicious, rich vegetable soup, tasty enough to be eaten sans kneidelach, matza balls on Friday night.

Soon enough, it was time to light Shabbat candles. 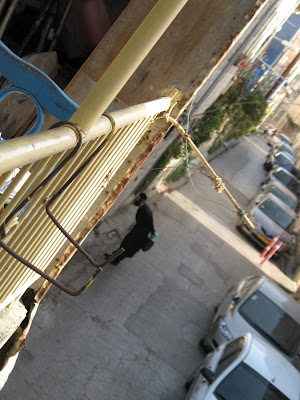 We had to decide in which synagogue to doven, pray. At home, in Shiloh, we go to the local shul, which is conveniently located in our "backyard." Not only does Nachlaot have a great variety of shuls, but Rechavia is only a few minutes' walk away.

It seemed like a good idea to go to the Rav Shlomo Carlebach shul leil Shabbat. Everyone talks about its special atmosphere. The Kol Rena shul is in a very large miklat, shelter. The front end is for the men, behind them the women, and behind the women is a large place for kids to play--and play they did. They were noisy, and the congregants didn't care much. There were also a couple running back and forth in the connecting corridor. Yes, the singing is beautiful, and if you like "drums," you could hear that, too, as some congregants need to bang out their prayers. Due to a Shabbat Bar Mitzvah, they announced that there would be a kiddush Shabbat morning after Shacharit, with "final chametz" for all and then, after eating and bensching, (saying the prayer after bread,) they would all finish the morning prayers. It sounded like a nice way for a community to have that "last chametz meal."

That evening, after eating a kitniyot-rich meal at my son's, my husband and I walked around the area to scout out when the various synagogues would be starting the next morning's prayers, since we had to finish early enough to get back to our son's for cream cheese and lox in a pitta. In the end, we chose the venerable Yeshurun Synagogue,which was once the most prestigious one in Jerusalem. The building of Jerusalem's "Great Synagogue" less than a minute's walk away emptied Yeshurun of congregants. It's not as empty, decrepit and pathetic-looking as the one in Tel Aviv, where we heard Chazanut, just over a year ago. The Yeshurun Synagogue is beautiful and kept in good repair. There is a resident Chazan, one of the best, but most of the seats are empty, even on a holiday like Passover. I think my husband agrees that it's the nicest place to pray in. And even though there is a Chazan, the prayers didn't take long. But I must admit, that I prefer the way the Hallel Prayer is said in our humble neighborhood shul. There's a magic when all the voices fill the small space, beseeching G-d together.

Have a wonderful Passover!

Thank you m'dear. Maybe you will come here some day...

Thanks frum, my pleasure.