Heroism in Our Time

During the 25 years I've lived in Shiloh, I've learned to just take opportunities and not to plan in too much detail. Yesterday was a perfect example.

The bare outline of my plans was to get to the Aliza and Menachem Prize Giving Ceremony at the Begin Heritage Center. I had also hoped to be able to get to "Ozen Shlishi," "The Third Ear," video/dvd place and take out a movie.

Ever since they changed all of our buses,I haven't the vaguest idea of the schedule. When I count on a bus to leave Shiloh, I'm usually left waiting, but when I just go down to wait, things are better. Yesterday was a classic!

I had one of my ESP-ish feelings that I had better run out of the house, so I did. These "feelings" have done me well on various occasions, usually for leaving Jerusalem and going home. The internet bus schedule said there should have had been a bus a few minutes ago, but I just didn't organize my time well.

As I ran down, neighbors stopped and offered me a ride to Neve Neeman, since they know that I have a cousin there, but... That's not where I was headed. Too bad. Then just as I was getting to the bus stop, I noticed a car stop, and they invited me in. To Jerusalem, but not the direct route. My neighbor was giving a "tour" to friends visiting from the states. Instead of Route 60, the quickest way, we'd be going via Shvut Rachel, to the Alon Road to the East, by the Jordan Valley. Then they were planning to see Migron, which is battling the Israel Government for its survival.

I did have time, and I believe in taking advantage of opportunities, so I got in.

Even though I've been on the Alon Road before, I was as amazed as the tourists at the total emptiness of the land we saw. Nobody lives there. Closer to Jerusalem we passed the roads to Kochav HaShachar and Rimonim, two Jewish communities housing a few hundred families. Those barren hills we had passed could easily be filled with a million people. There were no signs of ownership or habitation, but this is land that "Peace" Now demands we give to Arabs. The road was also very empty, so even though it was longer than #60, the trip was quick.

So before we knew it, it seemed like we were at the end of the road, but the road signs weren't clear as to which way to Jerusalem. We asked the soldiers we saw, who looked a bit confused but gave us directions. We followed them and got to the southern end of Route 60, near the turn-off to Migron. We followed the narrow, winding road to Migron and eventually saw a quiet community with lots of "caravans," trailers, surrounded by gardens and children's toys. There were also "buildings" which were obviously used as pre-schools. The school-aged kids are bussed to a nearby elementary school. 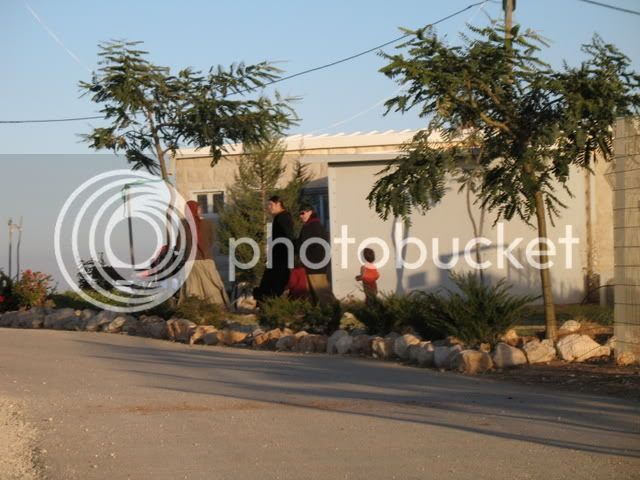 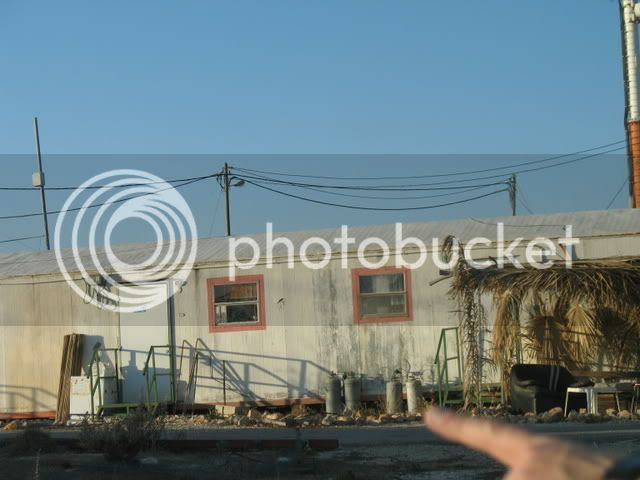 Nothing in the peaceful scene, which was before us, gave a hint to the fact that Defense Minister Peretz wants to distract the nation from the "PA" kassam attacks on his home city Sderot by destroying Migron.

After that, we were off to nearby Jerusalem, where I noticed the bus I had "planned on taking." So, obviously our timing was perfect!

Then I got out and took a bus to my destination, plenty of time, but then I found myself in a major traffic jam, which added about a half hour to the trip. I kept calm, convincing myself that I still had plenty of time, and yes, I did.

I picked up a couple of movies, "The Sting" and the new "Oliver Twist" by Polanski, and then I ran over to the Begin Center. They were still "eating." The menu had something for everybody--vegetable sticks, cookies and "sufganiyot," those doughy jelly doughnuts Israelis love to eat in the winter. 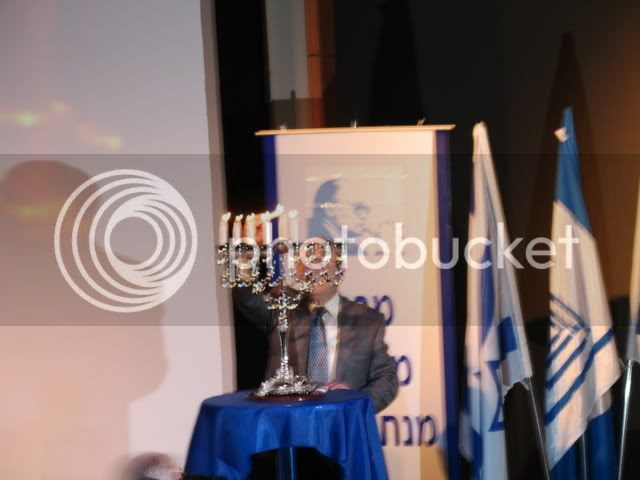 The theme of the awards this year was Heroism. They honored the People of Sderot and also Roi Klein and Emanuel Moreno two of the soldiers killed in last summer's nameless war. This year's entertainment was by the Pirchei Petach Tivka Children's Choir. 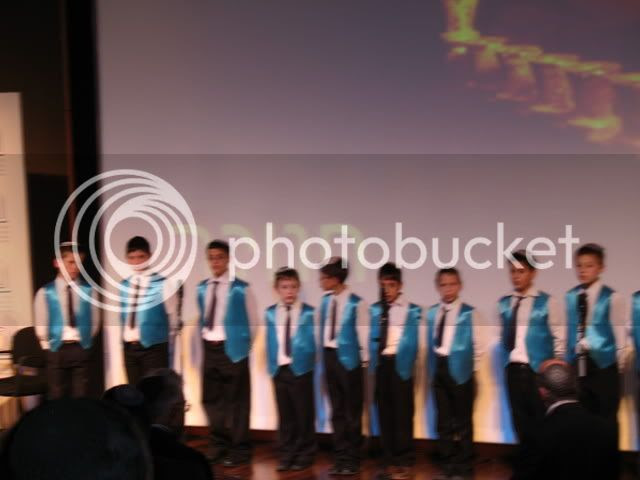 I'd say that the residents of Migron are heroes, too!
Posted by Batya at December 20, 2006

B"H I certainly pray that the residents of Migron do not lose their homes. But, heros? These are the same Jews who kicked out their fellow Jews from their town for passing out invitations to a hachnasath sefer Torah on the Tapu'ah West Hill synagogue a few years ago, simply because they had Rav Meir Kahane's HY"D photo on them. Granted, it's their town, and have a right to determine their own rules. But to kick Jews out for this reason?

Many of these Jews blindly follow the notorious "rav" Tzvi Tau, the chief of the mamlchti leaders who does not seem to see (or want to see?) many of the stiroth between Torah and the Israeli gov't policy.

"Rav" Tau was against refusing orders to throw Jews out of their homes in Azza and the Shomron, while gedolim like Rav Shapira, Rav Shmu'el Eliyahu, and Rav Lior clearly supported this.

I remember the last time they were threatened residents from all over came to their rescue, including many from Shiloh.

Maybe these threats will finally wake them up to incompatibility between their bowing down to the almighty medinah and keeping the Torah (ie. keeping their homes in Eretz Yisrael).

Tell me that the residents of Migron serving in the IDF last summer refused orders to throw Jews out of their homes. Then, I'll call them heroes.

I must admit that you definitely have some excellent points.
Shabbat Shalom and Chag Urim Sameach