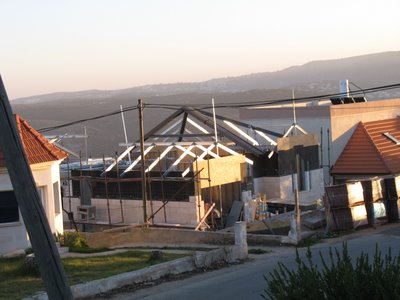 This is the view from my kitchen window (ok I walked out to the merpeset-terrace to actually take the picture, but that's what I see when washing the dishes), building Eretz Yisrael. Yes, that's how I see it as this lovely house is replacing the Biblical Valley of Shiloh, as seen from my house.

As beautiful as the valley is, and as wondrous, as I can actually see the winter "fog" as the warm moisture from the fertile ground hovers over the ground, looking like a lake. Yes, I'm willing to sacrifice it, if it means that I will have more neighbors.

How ironic and even tragic, that at this same time, the Israeli Government is warning and threatening that it will, G-d forbid!, destroy a vibrant young community, Migron.

Israel isn't viable without the our Ancient Land which we liberated in 1967. If the country had been viable before, then the Arabs wouldn't have had threatened to destroy us and wouldn't have had planned the war and gotten ready to attack. They were fully confident that they could do it easily, since the "the Aushwitz borders," as coined by Abba Eban, didn't give us a reasonable chance to survive.

Remember, the PLO was established while Jordan and Syria were holding the Land. Their aim is to see us dead to destroy our homes and communities and wipe the State of Israel off of the map. G-d forbid

There's lots of space here on our empty mountains. Let's fill it with Jewish communities.

I was in Homesh today. There is so much to rebuild there, and a lot of great people who have vowed to resettle the place. May Eretz Israel be speedily built and the destroyed communities rebuilt.

This is good news. After the girush, word had it that Shomron residents were near depression, people stopped home improvements, investing in real estate, and even watering the lawn. Baruch hashem, the building has resumed, people are renovating homes, and more families are moving in.