Before I get anything else done...

I absolutely adore this brilliance, Pat Oliphant by Pat Oliphant! All along, I've been saying that it's "an impossible dream" at best and that the U.S. will flee from Iraq in the most dangerous way! 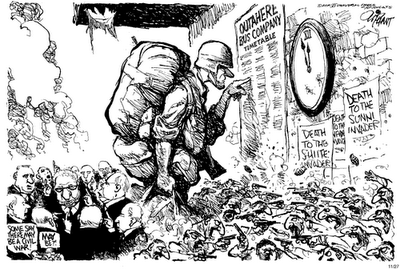 Gush Katif deportees, thrown out of their homes and business a year and a half ago, are still without compensation packages, but Northern residents already have theirs, and one even returned his, saying that he didn't suffer such losses.

We're included in the latest Carnival Against Islamofacism, so take a gander at the wide variety of posts.

Having heard war stories from my near and dear, about the IDF's military fiasco last summer in Lebanon, I'm not surprised that Comptroller finds severe flaws in IDF. 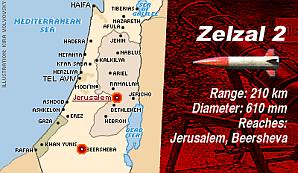 And even worse, since the latest missiles Syria has openly "smuggled" into Lebanon can reach the few cities, they couldn't read before, G-d forbid. (see the map)

If you don't believe me, read Caroline Glick:

The world has gone mad. As Lebanon teeters on the brink of Iranian and Syrian instigated collapse, senior American and British political officials urge President George W. Bush to hand Iraq over to Iran and Syria.

As the Palestinians push forward with their Iranian-sponsored, Arab supported jihad, Prime Minister Ehud Olmert responds by announcing his intention to release thousands of terrorists from prison and throw thousands of Israelis out of their homes while giving their lands to Hamas.

And to try to preserve my own sanity, I'll stop here. I have a busy day including, bli eyin haraa, two smachot and a full day of teaching. The trekker's boss has a baby boy, so there's a Brit Milah (circumcision ceremony) and after work there are Sheva Brachot (post wedding feast) for a neighbor's daughter. Mazal tov!
Posted by Batya at December 05, 2006