This upcoming Shabbat is Shabbat Zachor! Remember! It's a mitzvah, Torah commandment to remember that we have enemies who want to destroy us completely and take advantage of our weaknesses, like the Biblical Amaleks.

This Shabbat also marks twenty-two 22 years since I was injured in an Arab terror attack, which was the first ramming attack. A woman was murdered by the Arab terrorist at "my" terror attack, and a couple of dozen were injured more seriously than myself.

Yesterday, when on a bus home, I suddenly noticed that two of the bus windows had obvious signs that they had been hit by rocks. And it's no secret that there are periodic Arab terror attacks, low-tech rock throwing, on the roads. Rocks when thrown by Arab terrorists can kill, too.  Yehuda Shoham, HaYa"D, the baby son of neighbors was killed by Arab terrorists throwing rocks at their car.

I posted the photos on Instagram and facebook. Lots of people asked what had happened, so I replied that the damage was from an old attack. Egged Taavura just hasn't replaced the windows. Then someone wrote that those damaged windows are a reminder, like Shabbat Zachor. That's a very good point.

REMEMBER we have real enemies who want us dead and no allies who will help defend us. We, the Jewish People only have each other and Gd. 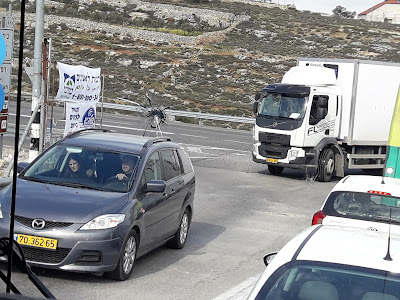 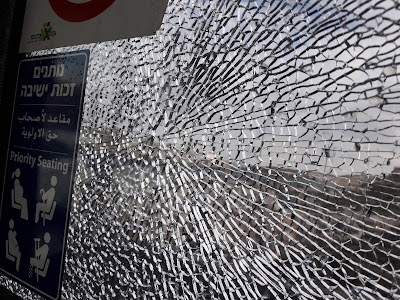 Since today's topic is Amalek, articles
about Amalek-in-out-times are relevant:

We must always remember

Amen. We need to remember and not forget. Everything is in the Torah!

No no Batya, i do not agree with this what you wrote:

'REMEMBER we have real enemies who want us dead and no allies who will help defend us. We, the Jewish People only have each other and Gd.'

This above hurt me... for I am not a Jew, but I love Gd's chosen and I would as one who loves and follows Hashem, never think to do bad for you all, i can do nothing at this point in my life... but i can, and do pray for the Jewish nation to Hashem, and i do also pray for all good non- Jews in this world, (and there are quite a many), that God bless and protect them too.

Not all non-Jews do or think as you wrote, yes, you all have Gd, and so do people like me too, I too along with all Creation, human and other creatures and everything are part of the Creation of Hashem..
I am human too and i hurt too, people hurt even those of us who are not Jews.

and among the Jewish nation sadly are also those who harm their own, you can call them 'amalek' those who were not Jews but "pretended", to be . who left Egypt- with the Jews, and are also still toda, known as 'Jews'.

Only Hashem knows who is real or a deceiver.

Please Batya, this is how i believe.. don't put us all in a lump, again i say there are many non Jews, who love you all.
And if by 'Allies", you mean countries... well i am part of a gentile country, but it might be their governments that would not stand by you.. as an individual and as a gentile, i stand for Israel.. B'H.