Shiloh, Not an Ordinary Town, Reflections

Reflecting on what living in Shiloh for close to forty 40 years has done for me...

Although my husband and I had always thought of living in a part of the Land of Israel liberated in the 1967 Six Days War, during our first ten years in Israel, it didn't seem very realistic. It's not because we were frightened spoiled American wimps. The reason was much more practical and pragmatic. There were very few options that suited us.

My husband wasn't going to be a farmer; he had enough of that as a teenager on Moshav Amatzia when doing that part of Machon Lemadrechai Chutz La'aretz. We had tried the Old City of Jerusalem, and it wasn't for us at the time, 1970. We had signed up to be of the original residents of Kiryat Arba, but he felt the travel to Jerusalem for work would be too difficult.

In the late 1970s when the first non-agricultural communities began to emerge, again we looked, and in 1981 we discovered Shiloh. At that point we were expecting our fourth child, and my priorities were to find a community where the older girls would have friends their age and schooling wouldn't be too complicated. Not knowing much Bible, the significance of our new home was rather lost on me.

Gradually, I began to understand and appreciate and become connected to the Biblical narrative about Shiloh, Eli, Chana and Shmuel. And I especially appreciated that it was in Shiloh where the Jewish People evolved from its tribal anarchy into a united Kingdom, first under Saul and then David.

I found myself leading tours, frequently of Christian groups. At that time more Christians came to Tel Shiloh to tour and pray than Jews. That was one of the reasons I began to invite women to join me for prayers on Rosh Chodesh, the beginning of the Jewish Month. In just over a week, we will celebrate Rosh Chodesh Adar, which heralds the time of joy and the holiday of Purim. 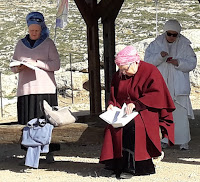 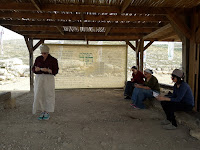 The religious and archeological site of Shiloh Hakeduma is open to the public six days a week, Sunday-Friday. For more information, email visit@telshilo.org.il or art@telshilo.org.il. See you Rosh Chodesh!

Our dovening is individual except that we sing Hallel out loud together. If you'd like more information, then please email me with "Rosh Chodesh" as subject, shilohmuse@gmail.com.
Posted by Batya at February 07, 2018