A couple of months ago, the rabbis here in Israel called for special prayers for rain, since the rain has been very sparse. As you may know, rain here in the Holy Land is a good barometer of how well we Jews obey Gd. If we're not "on track," then there will be drought or terrible damaging floods.

After the special rain prayers had been added by many, there was more rain, so after a short time, the rabbis announced that the emergency was over. You can guess what happened next. That's right. The rain ceased. And even worse, it started getting summerlike hot.

And soon after TU B'Shevat green leaves began to take over the almond trees, pushing out the flowers. It's a bit too early for that. I think we should have kept on praying for more rain. We need at least another month of rain at least three days a week. It's clear to me that Gd was disappointed in us. He wanted more prayers and a few other things... 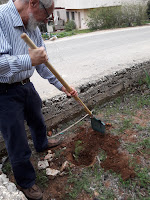 My husband and I took advantage of free trees and planted two. Unless it rains well, we'll have to water them pretty frequently for the next few months.

About the drought. I have no doubt that every single time someone here states that we no longer have to save water and worry about rain, because we've solved the problem with our brilliant technology, Gd cancels a planned rainfall.

Even if we can produce the needed quantity of water, we still need rainwater. Not all water is the same. I can taste the differences between mineral and non-mineral water. The purified and desalinated water just aren't the same. They don't have the same minerals, for healthy people and good tasting fruit and vegetables.

Gd willing, we will be blessed with good sufficient rain in the right quantities and season.
Posted by Batya at February 10, 2018

Did you ever wonder why G0D gave the
Land of Israel to the Jewish people?

The answer is found in the Biblical
Book of Tehillim [Psalms in English],
chapter 105, last 2 verses:

“AND HE [G_D] GAVE THEM [THE JEWS]
THE LANDS OF NATIONS...
SO THAT THEY MIGHT PRESERVE HIS
DECREES AND TREASURE HIS LAWS...”

How Torah Can Defeat Terrorism:
https://shilohmusings.blogspot.com/2017/08/defeat-terror-with-torah.html

Do not forget to thank God every time it rains in Erets Israel.
That's what the Mishnàh orders, and only the galuth rabbis of Bavel (where are they now?...) disagreed. Don't follow them!
https://www.youtube.com/watch?v=TeWd246RRbI