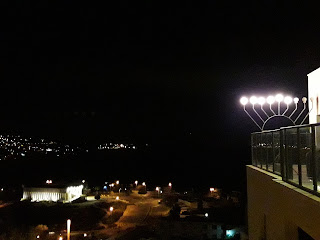 The main mitzvah, Commandment, of the Chanukah Holiday is Pisum haNess, Publicizing the Miracle. That is why we are commanded to place our lit chanukiyot, Chanukah Menorot in a place where people can easily see them.

That's why you'll see lit chanukiyot outside of people's homes or in their windows facing the street. And the oil, or candles, are supposed to stay lit for as long as possible, the longer the better. There is nothing discreet about Chanukah. 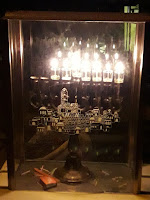 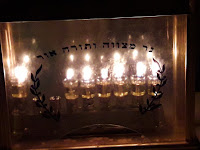 Chankukah is the only Jewish Holiday which isn't clearly mentioned in the Bible. Chazal, our scholars show where it's alluded to, but the story itself took place after all of the other ones, including the Purim story. Esther and Mordechai lived in the time between the First and Second Temples, while Chanukah is about the Second Temple centuries later.

There is not yet a Third Temple, though we Jewish People have begun returning to the Holy Land. And although the Chaunkah story of the Maccabees' victory over the Greeks leaves us with a very optimistic impression, their dynasty was very short-lived. And afterwards we suffered an exile of two thousand years.

Today's prominence of Jews and Israelis, especially those who aren't ashamed to publicly follow Jewish Law, whether it's in dress, insisting on Kosher food or refusing tor work on the Jewish Sabbath and Holy Days, is a very enlightening and "24/7" observance of Pisum haNess, Publicizing the Miracle. I also see the lights of Jewish communities all over the Land of Israel as Pisum haNess, Publicizing the Miracle.

As the sun goes down and the sky gets dark, lights of our return to the Holy Land burn brightly for all to see.

May we soon, speedily in our days build the Third Temple which will bring the Moshiach and Redemption, Gd willing.
Posted by Batya at December 18, 2017