From these outrageous and totally inaccurate headlines, you'd think that USA's Vice President Pence and the State of Israel cause all the problems here:

But the truth is very simple. It's really because of the Leftists, the journalists and the NGOs which egg on the Arabs to riot and attack Israelis. There's a very simple price to the violence. The IDF and Israeli Police have to stop them from murdering innocent Jews/Israelis.

The journalists/media love the violence, since it makes for nice eye-catching pictures and headlines. Their aim is the total destruction of the State of Israel, although then the violence will move to other countries. But they don't care.

For a very suitable Chanukah reminder... We have never had true allies, not in modern times, nor ancient times. A favorite phrase used by American leaders that they'll "stand by us" is totally useless, because all they promise to do is to "stand still" while Israel is being attacked. Then they plan on picking up the pieces and taking over. That is what Nixon and Kissinger had planned in 1973 during the Yom Kippur War. They tried to conduct it by "advising" both Israel and Egypt simultaneously. American troops had been waiting on standby in Europe for weeks/months ready to move in. We don't need "friends" like that. Only when Arik Sharon took over the southern front and ignored American instructions did Israel defeat Egypt and end the war.

Chanukah is a reminder that a small Israel only needs Gd as an ally.

Chag Urim SameachMay We have an Enlightened Holiday 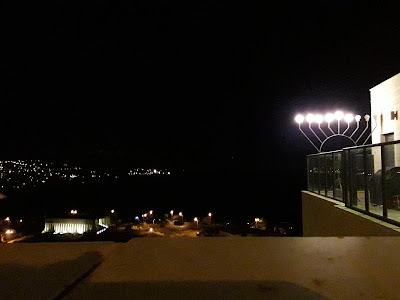 Articles about Media Bias against
Israel from Aish HaTorah:

4 Reasons Why the Media is Biased against Israel:
www.aish.com/jw/mo/4-Reasons-Why-the-Media-is-Biased-against-Israel.html