The Scars That Never Heal

Many frontline soldiers suffer a lifetime of post traumatic stress, which cause major life disruptions. These scars aren't always visible to the naked eye or even at everyday social events.

Last night at Shiloh Hakeduma, Tel Shiloh, there was a "meeting" with Natan Margalit, who had been a young, teenage soldier during the 1973 Yom Kippur War. After a few days of conventional warfare, some successes and some difficult losses, including of close friends, he found himself in the cruel hands of Egyptian soldiers. Yes, he was captured.

Even though, the Egyptian soldiers who had grabbed Margalit injured him, managing to stab him through his "bulletproof vest," while in Egyptian hands he was never seen by a doctor. When finally released over two months later, was still in the same bloody undershirt. It's a real miracle he didn't die from an infection. 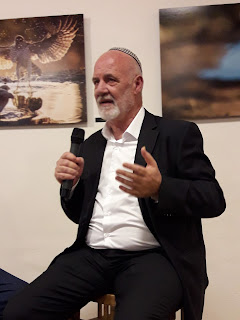 Margalit, now in his mid-60s, appears hale and hearty, but as he tells his story, it becomes clear that this is an illusion. His jokes and banter mask the damage to his psyche. It's clear that there's a limit as to what he will publicly admit to, which is both a survival tactic and a sign of Post Traumatic Stress.

The Egyptians played mind-games with him as a form of mental torture. They'd threaten execution, so that he expected to be killed any time. Unlike the Israeli prisoners of war held by the Syrians, Margalit and the other Israelis were kept in total isolation while jailed. Even when finally in the plane home to Israel, Margalit remembers everyone sitting alone, leaning against a window wondering if this was just another cruel trick being played on them.

In the audience, besides his very elderly mother, there were many old friends of his, former neighbors and some who had served with him in the IDF.

The event was part of a series of talks being held all over to give a voice to Israeli veterans, of which there are many.

As an injured terror survivor, wife and mother of IDF soldiers, I know very well how easy it is to suddenly become a "statistic." Nothing is guaranteed in life, no matter how hard we try to be "good."

Gd willing we will pass whatever tests Gd puts before us with added strength and a sense of humor.

Shabbat Shalom UMevorach
May You have a Peaceful and Blessed Sabbath 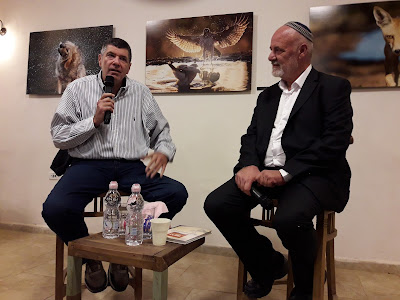 Who is the interviewer or MC?

I didn't catch the name.