The Fast of the Tenth of Tevet

Today is a fast day on the Jewish Calendar, the 10th of Tevet. The eight day Chanukah holiday ended just a week ago. Chanukah celebrates the impossible sounding miracle of a small group of Jews fighting the mighty Greeks, a fight for the possession of our Holy Temple in Jerusalem. 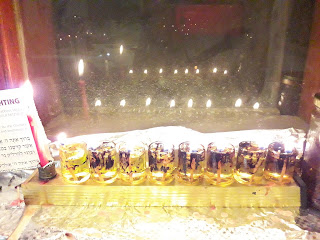 We finish Chanukah with a fully lit Chanukiya burning brightly feeling rather invincible. I grew up in a rather non-observant Jewish home. Even in my Conservative Hebrew School, I don't remember hearing about a fast day after Chanukah.

If anything, the power felt from Chanukah took us all the way to Purim.

That's really a mistaken notion. I remember my shock the first time I read that the heroes of the Chanukah story, the Maccabees, the Hasmonean Dynasty ruled a very short time. Jewish History isn't a simplistic fairy tale. After the pure olive oil stayed lit for the full eight days, while more oil was readied, the Jewish People didn't live happily ever after...

Even in modern times, our great victories in 1948, 1967 and 1973 haven't guaranteed us lasting peace. We must keep our enemies far away from us. Our existence as an independent country and Jewish People is a constant battle.


The Tenth of Tevet marks the onset of the siege of Jerusalem by Nebuchadnezzar, the King of Babylonia, and the beginning of the battle that ultimately destroyed Jerusalem and the Temple of Solomon, and sent the Jews into the 70-year Babylonian Exile. The date of the Tenth of Tevet is recorded for us by the prophet Yechezkel, who himself was already in Babylonia as part of the first group of Jews exiled there by Nebuchadnezzar, 11 years earlier than the actual destruction of the Temple in Jerusalem itself. aish.com

Judaism pays attention to the first stages of our tragedies, not just the dramatic endings. We must always be on the alert to stay safe and preserve our independence and freedom.  We don't want to be conquered and exiled yet again...
Posted by Batya at December 28, 2017