If Bogie's the Alternative, I'll Stick With Bibi

If you've been wondering why I haven't written about attending any of the "anti-corruption" rallies, it's because I don't see them as sincere, or as it's said in Hebrew, לשם שמיים, lisheim shamayim, for the sake of Heaven. They are clearly political tricks/cons to get Prime Minister Binyamin "Bibi" Netanyahu out of office. I agree that he's far from perfect, but I don't see anyone who can replace him, certainly not former Defense Minister Moshe “Bogie” Ya’alon.

It's pretty obvious, that this "movement" is backed by people with a not so hidden agenda, and their agenda is to get Netanyahu out of office. If anyone has the means and connections, then please FOLLOW THE MONEY. I wouldn't be surprised if it ends up coming form international Leftists, like Soros and those who financed the "anyone but Bibi" and V15 during the last Israeli elections.


The Obama administration is using taxpayer dollars to fund a radical anti-Israel group that aims to drive Israeli Prime Minister Benjamin Netanyahu from office in March parliamentary elections.
And the U.S.-based group receiving the U.S. government money, OneVoice International, in turn is working with V15, an "independent grassroots movement" in Israel, according to Ha'aretz. V15's unofficial motto is said to be "anyone but Bibi," a reference that includes the prime minister's nickname.  complete article click

The International Left has plenty of money, but it didn't help them in the USA 2016 Elections. Trump won.

I don't trust Bogie any more than I'd trust Ehud Barak or Barack Hussein Obama and his backers. Years ago, I'd heard Bogie touted as the "great Right hope," and I never saw him prove it when in office. That's why I spent yesterday evening at a football game, American tackle football. I saw more honesty on the field, than I would have heard from the speakers at the demonstration. 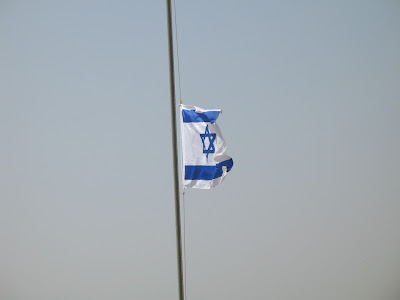 As good as Bibi may be, this may be one reason I favor term limits for politicians. No matter how good a politician may be, he/she can't be consistently good the longer he/she is in office. And, unfortunately, Bibi may be demonized as "hard-line," but somehow Likud may not really be the hard-liners that many people think.

Sometimes, I think that if the government is to be condemed as "hard-line," they should give the critics something to complain about.

The talk usually is that Bibi may not be so great, but looking at the alternatives people want to stick with Bibi. The problem is that Bibi gets entrenched in the prime minister's office and either is too hard-line or not hard-line enough. Maybe it's time for him to go and we need to get used to it.

Fortunately, Bibi has unified Israelis in the sense that even the left-leaning parties aren't advocating automatically making concessions to the Palestinians, even if it costs them in international prestige. Having done that, this would be a good time to prepare for Bibi to step down and have his successor continue standing up to the world.

I don't like Bogie at all. He's even shiftier than Leberman, and that's saying a lot. My guess is that he'll be out in a couple of years and a younger person will be in. Maybe the Bennet Shaked duo will revolutionize Mafdal aka Bayit Yehudi.

I hope that works. I have heard that these two may be the future. But people seem to dismiss them because Bibi has been there too long.

Batya Medad, I have two-plus decades of experience
fighting against Christian missionaries who specialize
in converting JEWS to their religion, for example:
“Jews for Cheeses”.

I studied their beliefs for many years,
and I know exactly what they believe.

The commentator who calls himself “Shiloh”
said EXACTLY what they believe.

Shiloh said:
“God stopped communicating with us in 30 AD”
– this is EXACTLY what Christians believe and emphasize.

Shiloh said:
“rabbis are hiding something from us”
– this is EXACTLY what Christians believe and
emphasize –-- especially when they speak to Jews.

Sheldan, we'll see. I prefer elections and the regular political process to demonstrations to throw out a sitting Prime Minister. Demonstrations against a legally elected leader is fascist if you don't mind my says so...

Mr. Cohen, I don't care what xtians believe in. I am asking you why the Talmud records that and WHY for the next 40 years God did NOT accept our sacrifices. Just answer the question instead of your usual deflection of uncomfortable Talmudic statements.

Chas v'shalom, what choices, Bogie, Barak. Why take these losers out of the dustbin?
Believe Bibi will be the pm in power until Moshiach is here. H' is running the show and all these lefties (because they all are) keep on thinking they have a chance.

Answer to Shilo's last question about the sacrifices - why doesn't he just ask a very learned prominent scholarly Rabbi who might once and for all answer his questions and he might be very surprised and learn what truth is and it will turn him around to true Torah!

a, Shiloh doesn't want to learn about Judaism. He's from another religion.