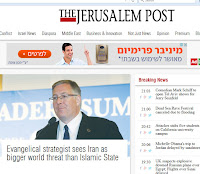 Evangelical leaders Joel Rosenberg and Michele Bachmann are making headlines this week. Both "pro-Israel" Christians are publicly calling for the conversion of Jews. But while the press had a field day over Bachmann's comments, Rosenberg – the more virulent missionary- enjoyed a PR coup with his apocalyptic predictions at last week's Jerusalem Leaders Summit.

Why certain Jewish leaders from the public and private sector seemingly jump at the opportunity to rub shoulders with those who openly and actively seek the demise of Judaism is an age-old question, which urgently needs to be answered… more

Very, very surprised how Messianics have lead Western Evangelical Spin: many of whose Denominations ~ specifically those that are Rebellious toward Israel ~ have Fallen into Politikilling themselves, an Affliction that must be addressed, especially within their Military. Messianic Ascendance began circa 2008. Why do I know that? Because ≈80% of Americans IDentify as Monotheists. If Hillary's twitter account is any indication, their ilk will likely continue to rise, if she wins the White House, but with an emphasis on Uniformity, which IS important east and north of the Jordan River, so I hope Samarians and Judeans understand;

Whats so ironic is that Joel Rosenberg does not follow the teachings and tradition of Jesus but that of an apostate named Paul. Jesus and his brother James who led the messianic movement after the death of Jesus were opposition sadducee's. So both sides are busy deceiving each other, what a crack up.

All I can say is that they are not friends of Israel if they try to convert Jews.
Ellen thanks for posting

Let's face it. Their religion obligates them to missionize. All those naive (to say the least) Jews who put their trust in this friendship are in for a surprise. If they don't care, then they have no Yiddishe neshomot. There is only one reason for this great love and their trying to infiltrate, the replacement of Judaism, c'v. It is becoming clearer by the day to those who doubted it.