Will The "Nuclear Deal" Stop Iran or Just Enrich It?

It's being called "the nuclear deal," and I wonder if it's going to last long.


(Reuters) - Iran and six world powers reached a breakthrough agreement early on Sunday to curb Tehran's nuclear program in exchange for limited sanctions relief, in a first step towards resolving a dangerous decade-old standoff.
The deal between the Islamic state and the United States, France, Germany, Britain, China and Russia was nailed down after more than four days of negotiations.
"We have reached an agreement," Iranian Foreign Minister Mohammad Javad Zarif announced on his Twitter feed. French Foreign Minister Laurent Fabius also confirmed the deal.
Iran will get access to $4.2 billion in foreign exchange as part of the accord*, a Western diplomat said. No other details of the agreement were immediately available.

All I can say is that it looks good for Iran, but I wonder if it's good for the world.

One of the phrases in the Reuters article, on which most news sites are basing their reports, that makes me nervous is this which I've put in bold and italics:


The talks were aimed at finding a package of confidence-building steps* to ease decades of tensions and banish the specter of a Middle East war over Tehran's nuclear aspirations.

The idea of sanctions should be to do the opposite, put an aggressive country in its place, not reward it and certainly not build up its already over-inflated confidence. 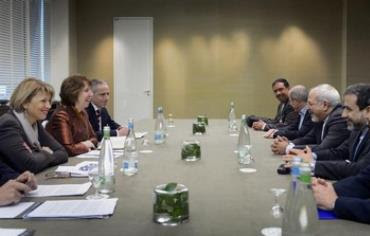 This is the twenty-first century version of "The Mouse That Roared."  In this modern version, it isn't a poor backward country that inexplicably and unintentionally defeats the world power in search of a "Marshall Plan" of foreign aid, a wealthy aggressive country just threatens the world with its nuclear weapons development and gets lots of financial gifts from world powers.  We're all supposed to trust a country that has never been honest.

The party-like atmosphere, diplomats willing and wanting to make a deal no matter the cost and quality, remind me of those who rush to get married, because they want to have a wedding, which is a sure-fire recipe for divorce.


Israel says the deal being offered would give Iran more time to master nuclear technology and amass potential bomb fuel. Prime Minister Benjamin Netanyahu told local media in Moscow that Iran was essentially given an "unbelievable Christmas present - the capacity to maintain this (nuclear) breakout capability for practically no concessions at all".

It's obvious that Israeli warnings have been ignored, and Israel will be threatened by the countries that negotiated the "deal" against doing anything to endanger it.

A lesson Israel should learn from all this is that being nice, reasonable and willing to compromise will get you nothing from the world, just scorn.  We'd be treated much, much better if we would just stop being Mr. Nice Guy and just do what's best for us, our security and our future!
Posted by Batya at November 24, 2013

the above number 3 storm to hit arizona is expected on the eve of thanksgiving. it is sad that innocent people suffer, but no one can say. Hashem did not warn us. i dont know what it takes to wake up the 70 nations.

I hope the government of Israel acts in its own interests and the reaction of the American People will oppose an unpopular President.

You will see the faux supporters of Israel like Gene Zitver and Marc "Screwball" Goldberg reveal their true colors when Israel acts. Their sole alliance is to a failed Dear Leader style President.

Both frauds chose the code of Omerta when Obama stated that he knows what is in Israel's interests better then its elected
leaders. Never before in the history of Washington has a self
deluded doofus occupied the Presidency. The statement was pure Obamunism in that he alone as the savior knows what is better for you and you need to sacrafice your liberty for the whims of his demented meglomania.

rainbow, I don't know how much G-d uses the weather to punish out of Israel.

From another perspective, why is the Far North Idolized? Is something awry in Galil? Have residents in Safed not taken out the trash yet (the fiasco of the previous War in Lebanon should be corrected)? Hashem clearly hates Esau, Gog and Magog and Company, as per Ezekiel, Zechariah, and Malachi. All Nuclear Facilities will be dismantled, no matter how and no matter the Sub-Human cost; consider Chernobyl and Fukushima as Existential Tests upon Human Ingenuity).

Perhaps, any mention of the Nations should be prohibited, from henceforth. Don't Idolize the West, who are clearly ignoring Plagues, Severity, and Afflictions upon themselves.

Israel [including Sinai, Gaza, Lebanon, Syria, Iran, and Jordan], Samaria, Judea and Jerusalem are going to have to begin the Global process of Domestic Purification ie Martial Law and worse. It's that simple. Use Domestic Worker terminology to soothe the Nations into Derisive Reality.

Oh. And then delegate accordingly, once Israel harnesses all the Nations. That way affluent tourists from East Asia can come visit for a brief, but mutually-beneficial vaca.

May Da Schwartz Be With Yisrael said...

China is all ready collecting Japan's debts and insisting on claims, militarily. Israel (all Jews) should consider likewise by annexing Sinai, Gaza, Lebanon, Syria, Iran, and Jordan BY FORCE.

Not as frightening sa you think. The
President will have to back down as his power is greatly diminished.

batya. in one my lessons this quote came.
Tractate Sanhedrin, 98b
The great Amora Ula said, May he (mosiah) come, and may i not see him.'
rabbi lazer brody of breslov explains, may mosiach come, but i dont want to be in that generation that heralds his arrival; Ula, Rabba and others felt the challenges of this generation would be that great. so definitely Hashem will judge with compassion. He has placed one small lamb amongst 70 ravenous wolves. no doubt the 613 laws were meant to be followed to protect yourselves, but its not that easy on the ground and who knows it better than G-d. i take it that all these decisions are Hashem's ,move to check mate the 70 leaders. may it be His Will that it happens soon.

clock and "may," are you the same?

beaker, are you sure?

rainbow, I have no doubt that the Moshiach was here in June, 1967 but went packing when Moshe Dayan returned the key to Har Habayit to the Muslims.

10 Rainbow: Thanks for your comment. Your comment says it all. It is 'Hashem' who is in charge and everything is going according to His Plans. The unJewish leadership together with Edom, Yishmael are doing all they can to hinder the geulah, but since it is Geulah B'Itah, nothing can stop it, except it will be a harsher redemption than one with the Jews having done real teshuvah, as we can see how the world is turning crazier by the day. Nothing or no one can stop it now; may it be with great mercy for the Jewish people and all the righteous of the world, speedily, in a blink of an eye.