Yesterday afternoon/evening, when I got back from work, the Israeli news was a big special on Channel One about the visit of the French President to Israel.  It seemed to me that the crew on the screen were a bit confused and befuddled by the recent turn Israel's diplomatic status had taken.  They're much too used to fawning over everything American, and suddenly there's a new family on the block, the French.

The commentators seemed to know more about the history of French-American relations than of French-Israel.  For those of us long in the tooth, we remember that there was a time before the Americans paid much mind to Israel.  We were banned from even buying American weapons; forget about getting American shopping coupons aka "aid." That's when Israel had a better relationship with France.  We bought military weapons and supplies from them.  That is until the French joined the anti-Israel boycott after our victory in the 1967 Six Days War and reneged on a purchase contract for ships, the Cherbourg Project.


The Boats of Cherbourg was an Israeli military operation which took place on 24 December 1969, and involved the escape of five Sa'ar 3 class missile boats from the French port ofCherbourg. The boats had been paid for by the Israeli government but had not been delivered due to the French arms embargo in 1969.

And of course, anyone with a minimum of knowledge of French History must remember the total capitulation of the French Government to the Nazis.


Vichy France, officially the French State (l'État français), was France during the regime of Marshal Philippe Pétain, during World War II, from the German victory in the Battle of France (July 1940) to the Allied liberation in August 1944.[2] Following the defeat in June 1940, President Albert Lebrun appointed Marshal Pétain aspremier. After making peace with Germany, Pétain and his government voted to reorganize the discredited Third Republic into an authoritarian regime.

But today, all of a sudden, France is Israel's best friend.  Politics does make strange bedfellows, and recent international politics certainly isn't dull.

I consider the dangers of a nuclear Iran to be international dangers, not just Israeli.  It frightens me to hear too many world leaders acting like we're the most threatened by the Iranians.  Netanyahu did explain the dangers to the world.

Here are two quotations from PM Netanyahu sent out by his media staff:

"At the welcoming ceremony at Ben Gurion Airport, you said that it is better to be right and in the minority, than to be wrong with a majority. Well, I couldn’t agree with you more. The deal that is being put on the table in Geneva is not a good deal. I believe it’s a bad deal and a dangerous one. I applaud the fact that you, personally, have taken a stance to make it tougher and firmer, but I‘m concerned, gravely concerned that this deal will go through and in one stroke of the pen it will reduce the sanctions on Iran, sanctions that took years to put in place. And in return for this Iran gives practically nothing...

"It’s clear that this agreement is good only for Iran and that it’s really bad for the rest of the world. Iran’s dream deal is the world’s nightmare. So today. I believe the choice is not between a bad deal and war.After the visit to Yad Veshem: We understand exactly when somebody says that they’re out to destroy you, we've learned in our Jewish history to take them seriously. And I think from humanity’s point of view, there should be another lesson. When somebody starts by attacking the Jews, they generally don’t end there, and the fire soon catches and burns many lands.Now in Yad Vashem, I was moved by the fact that you were so visibly moved, and you said, when you came out, you said that the experience of the Holocaust places a very special responsibility on all of us. François, I want to tell you the burden it places on me, as the Prime Minister of Israel. It is my duty to prevent anyone from credibly threatening or executing another holocaust against the Jewish people. This is my obligation, but I also believe it’s our common obligation for the sake of mankind, for the sake of our common future." 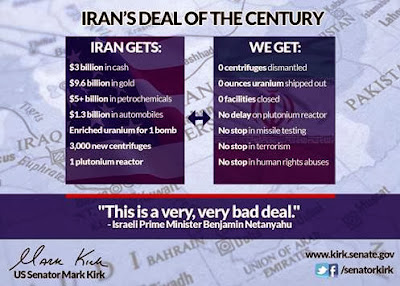 The French haven't forgotten their humiliation at the hands of the Americans on Syria. The Americans put the knife in their back by cutting a separate deal with the Russians.

Now they're deligted to put the knife in America's back as payback by making life very difficult for the Americans. Hence, their new-found alliance with Israel.

And it does not escape the notice of the energy-hungry French that Israel is to going to become a major energy exporter in the near future. The French are not visiting Israel because they love the Jews.

Its just that French interests are best served by drawing closer to Israel now and no one has excelled in the art of serving their own interests as well as the French.

Where the most Christian kings of France once allied themselves with the Ottoman Sultan to undermine the Holy Roman Emperor, today the French President, in allying with Israel, is underlining the irrelevance of the American hyperpower in today's Middle East.

only Hashem is your true friend.

Agence France Press reports that on Sunday, Hollande made it clear that France also expected "efforts" from the Palestinian Authority although he did not go into details. A member of his entourage said, "It is clear that this will require efforts from the Palestinians as a number of Israeli settlements will remain."

A brilliant quote taken from an editorial from a while back puts it succinctly: "Something smells Vichy."

Of course, 10 Rainbow is correct. Only Hashem is our friend. H' gets angry when we rely on the nations to help us. We would never need the aid of other nations if we would heed His Commandments and rely only on HIM. We read in Nach how when the kings made alliances with their neighbors, it found great disfavor in the 'eyes of H'. Today, since the State looks for help to those who say they will, Israel should 'respect but suspect'.

You all have good points.
Norman, I don't think that France offers sincere friendship. We could never rely on her, which is why I wrote about the rotten way they have treated Israel in the past.
Rainbow, of course, thanks.

I'm not saying Israel should fall in love with the French again. Israel should act like it has interests that can be advanced in concert with them and nothing more.

After all, relations between states are not based on sentiment or on fidelity. And the other posters are completely correct that Hashem is Israel's only true friend!

Norman, it's about time Israel did things in its best interests and not just to get "affection." We're just too quick to "jump inot bed" with every country that acts willing.

In the long run, we can only trust G-d.