We've Been Marching About This For Years! 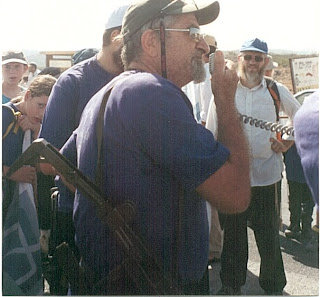 Nu? So the Jerusalem Post editorial staff thinks they've "discovered America?"
Today they published a very convoluted editorial about how the Israeli High Court makes its decisions about military issues according to its concept of "morality." The editorial has its good points, which they tried to dull to a very PC finish.

For many of us, it's painfully old news.
Four and a half years ago, our neighbor, Avihu Keinan, was killed in an army action, planned to do minimal harm to enemy civilians at the risk of endangering our soldiers.
Avihu's parents obviously knew the risk of normal military action, but when they discovered that their son had been killed because the army had endangered him to protect the enemy, that was too much. His father Moshe declared a march to the Israeli President to protest the absurd, dangerous, perverse morality ruling our military.
That Succot, just two and a half weeks after Avihu's death, Moshe led us on a march from Shiloh to Jerusalem and then camped out by the President's Residence until the end of the Holiday. Since then it has become a Shiloh tradition to march to Jerusalem.
Many Israeli soldiers, civilians, police and border police have been killed by terrorists, because there's something dangerously "confused" in the Israeli concept of what's "moral." The lawmakers, the Knesset have invested too much power in the courts, especially since Israeli high court judges think their job is to judge according to their personal opinion, rather than law.
Posted by Batya at January 27, 2008