Shiloh, One of Judaism's Holiest Sites 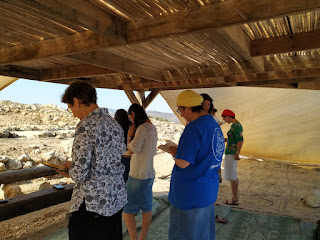 As time goes on, since we made the move to Shiloh thirty-eight 38 years ago, I've become more and more attached to its holiness. If you read the Tanach, Bible, you'll learn that it was the first capital/central city for the Jewish People. Shiloh is one of the locations Joshua leading the Jewish People was able to enter without a battle. The Canaanites had left. 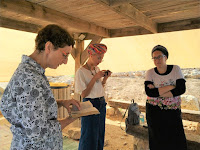 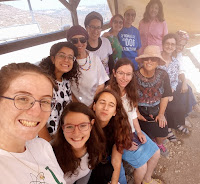 According to the Biblical text, the Mishkan, Tabernacle was assembled on a flat area, where it remained for close to four hundred years. The Kohanim, Priests were in charge, and Jews arrived to pray, especially for the Jewish Holidays. Archeologists have found enormous jugs and the remains of food. The Bible relates how Elkana would come with his family, gathering others on the way. His barren wife, Hannah, went to the holy spot to pray for a son, whom she pledged to Gd would serve Him and the Jewish People. A son was born to them, Samuel the Prophet. Women have come to Shiloh to pray ever since. 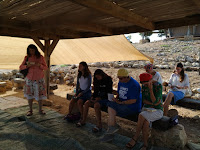 For well over a decade I've been inviting women to join me praying together on Rosh Chodesh, the first of the Jewish Month to pray together. Next Rosh Chodesh will be Rosh Chodesh Cheshvan, Tuesday October 29, 2019, 30th of Tishrei, 5780, 8:30am. We can't have our prayer group at the beginning of Tishrei, because it's Rosh Hashannah. 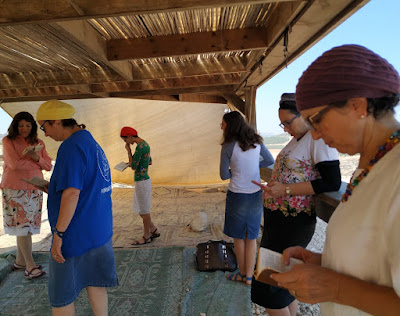 I know that many Jews go to pray at graves and tombs, but I feel that those places are extremely problematic. Gd has made it clear that we're not supposed to pray via dead people. That's why the location of Moshe, Moses's grave is unknown. Gd took him and his body. Also, unlike the theology of other religions, we're supposed to pray directly to Gd, not via an intermediary.

Women, unlike men, aren't required to pray with a minyan, quorum of ten or more. Please join us if you can. Our prayers are silent, except for the singing together of Hallel on Rosh Chodesh. For more information email shilohmuse@gmail.com, "Rosh Chodesh" as subject. 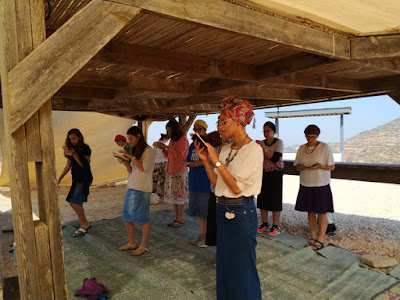 Shiloh Hakeduma, Tel Shiloh has a special women's event a few days before Rosh Hashana, which they call "Tefilat Chana," "Hannah's Prayer." This year it will be Wednesday, September 25, 2019, 5pm, tours, music and Rabbanit Yemima Mizrachi as main speaker. 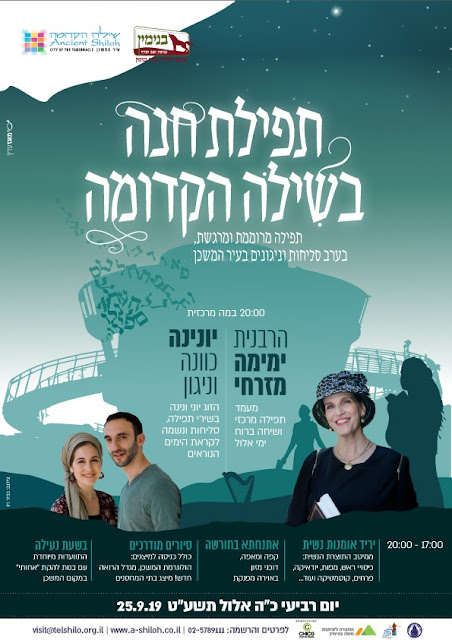 Yemima Mizrachi: WOW! Who doesn't love her? Have dear friend who considers her strong Moshiach candidate. 😂
As to davening at kvarim, you are certaunly correct abt NO INTERMEDIARIES ALLOWED. As explained to me, part of neshama remains attached to body which explains kvarim aspect. interestingly, R Moshe Shapiro once lay diwn on Maharal's Prague stone, calling it "preview of T'chiat Ha Meitim"!

“We can't have our prayer group at the
beginning of Tishrei, because it's Rosh HaShanah.”

This is true, but you could have
your prayer group 6 or 7 or 8 days BEFORE
Rosh HaShanah, and that would be a
good way to help prepare for the Yom HaDin.

“Gd has made it clear that we're not
supposed to pray via dead people.”

The Vilna Gaon wrote a famous
letter to his family (the Igeret HaGra)
which teaches that Jews should avoid
unnecessary visits to cemeteries.

“The Arizal warned us to NOT
visit a cemetery except to bury a dead person.”

Mr. Ali Adi [an Arab who lives in Israel] said:

If you ask any one of them [Arabs] during a casual conversation, even the biggest hater of Israel will tell you honestly that they prefer a conflict with Jews to a conflict with other Arabs, which would naturally result in brutal, unchecked bloodshed.

The Arab citizens of Israel will admit that they prefer the Israeli government to an Arab one, even if from their comfortable positions at Israeli universities they prefer to call it “the occupation.”

Mr. Ali Adi [an Arab who lives in Israel] said:

“The truth, which the entire Arab world already acknowledges, that the Israeli army is the more humane and considerate than the Arab armies, fills me with pride.”

“Whilst the Israeli Defense Forces are not
perfect, the obsession of focusing on them
despite being the most moral and professional
army in the Middle East is very strange.”

Regarding davening at kvarim...: it's well known that Yoshua got protected and prevented from "atzat hameraglim", the spies'(wrong) advices, by Moshe, that did add a letter to his name. Well, what about Caleb ben Yefune ? He was the only one along Yoshua that did not follow the others, the meraglim. But his name remained the same, and Moshe did not pray for him. So, why did he make it throught ? Becuase he went to Hevron and davened at the Fathers's graves !!! That's written in the Chumash, it's obvious !!

a, Caleb was a tribal leader, not national. He didn't need the extra letter.