Strange Sounds in The Night 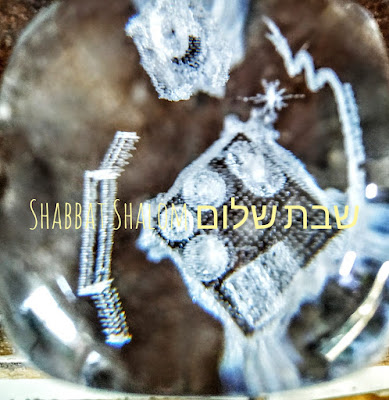 Friday Night, Lail Shabbat, after we had finished eating, suddenly a piercing wail filled the air. It was an emergency alarm. I locked the doors and then all the easy to access windows. My husband pooh poohed it, insisting that it was just an "electrical problem."

Then the siren wailed again.

The street was quiet. If something was going on, we'd hear noises.

Friday nights have been chosen by Arab terrorists to attack innocent Jews. They've snuck into homes through open doors and windows and murdered, maimed, terrorized and scarred Jews, young and old.

Should we turn on the phone to check for messages? No, the house felt safe. It was Shabbat.

The siren wailed wailed loudly. This was no "electrical problem."

I didn't want to turn on the phone. If there was bad news, it could wait.

We used to have a beeper that gave security announcements without our having to touch it, but since nowadays everyone has phones, the beeper is passe. I sure missed that beeper. I refused to turn on my phone.

My husband went to sleep. I couldn't imagine sleeping. I was at high alert. It would take more than an "all clear" siren to get my body to fall asleep.

Yet again, the siren pierced Shabbat's silence, like a terrorist in the frenzy of murder.

If the sound of the siren is unbearable in the living room, then there's no way I could attempt to sleep in our bedroom, which is much closer to the siren's loudspeaker.

Our street was silent. No soldiers rushing around, nor ambulances providing first aid to injured.

If something has happened in Shiloh, it didn't happen in my neighborhood.

Siren, stop your screeching. I can't take it anymore.

No doubt my blood pressure is sky high.

Gd willing the sirens are just to tell us to stay indoors, because of a suspected incursion. This happens periodically in Jewish villages. Today's security is high tech, which can detect movement on the borders, even when there aren't any fences. Many times it's no more than a patrolling soldier taking a discrete "leak." But until it's known for sure what triggered the alarm, we must stay put. It's already past bedtime, so I have no plans to leave.

And now I see lights rotating like at a disco from army vehicles in the street. They must be looking for terrorists, or just missing kids...

Our kids are grown up and don't live at home.

I'm tired. Can I risk falling asleep? What if the sirens resume?

I finally get myself ready for bed, but end up reading on the couch.  And then I dozed off.

Did someone just call me? I'm up again.

I try to sleep in bed. Again I doze off, but I thought I heard knocking. I'm up again. But I'm silent.

Back to the couch, and then back to bed.

My husband tries to wake me up to go to synagogue.


"No," I tell him. "I need to finally sleep. You go, and when you find out what had happened at night, come home and tell me."

Later on my husband returned with a report:

Later I went to the synagogue. A young neighbor said that she had to turn on her phone and call the parents of children who were in her house when the sirens had began. Instructions are that nobody is to go outside during security alerts. She, in turn, got calls from other parents who had her children.

Thank Gd we only lost sleep, not lives.


Shavua Tov
Have a Wonderful Week 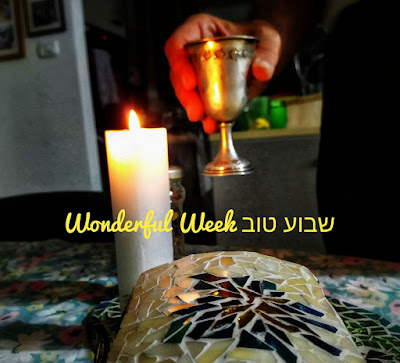 Shavua tov to you too. My blood boils with outrage and my heart cries when I read your piece. When will Jews learn to assert national sovereignty and make it safe for Jews to live unafraid in our own land? Kol hakavod to you. Shabbtai

In the Biblical Book of Joshua, chapter 13,
G*D criticizes the prophet Joshua for failing
to conquer every inch of the Land of Israel.

In the Biblical Book of Judges, chapter 3,
Israel's failure to conquer every inch of
the Land of Israel leads directly to:

[1] intermarriage with the local Gentiles

[2] worshipping the false gods of the local Gentiles

“...Cumanus, whose governorship was marked
by disturbances and further disaster to the Jews.

The people had assembled in Jerusalem for the
Feast of Unleavened Bread, and the Roman
cohort stood on guard over the Temple colonnade,
armed men always being on duty at the feasts
to forestall any rioting by the vast crowds.”

“[Rashid] Khalidi [of the Center for
Palestine Studies] inadvertently admits
that the Palestinian economy consists
almost exclusively of handouts from
the world, especially the United States
and Israel. Cash installments to the P.A.
[Palestinian Authority] are used to pay
everyone from terrorists to counter-terrorists.

Israel collects taxes for the Palestinians
and supplies most of their electricity and
water. Many of the real job opportunities
for Palestinians who reside in Judea and
Samaria, [the so-called “West Bank,”]
are provided by Israeli companies.”

Saudi journalist Fahad al-Shammari
declared [in a television interview] that:

“the Palestinians are beggars,” and “have no honor”.

“the World's most tiresome cry-babies
with a bogus cause and a plight
that is entirely self-inflicted”.

MICROBIOGRAPHY:
Mr. Patrick Condell is an atheist,
who was born in Ireland around 1950 CE,
and raised in England as a Roman Catholic,
and educated in Church of England schools.
He has no Jewish ancestors and no religious
beliefs that might cause him to favor Jews.

Thane Rosenbaum [author of many
books and a Distinguished Fellow at
the NYU School of Law] said:

“In this universe of automatic virtue
bestowed upon anyone with a history
of oppression, Jews are, bizarrely, kicked
off the team, their privileges suspended,
all because of their ostensible White privilege.”

SOURCE: ‘Fiddler on the Roof’
reminds us of age-old Jewish truths
by Thane Rosenbaum, 2019 August 7
www.algemeiner.com/2019/08/07/fiddler-on-the-roof-reminds-us-of-age-old-jewish-truths/

Major General (res.) Gershon HaCohen,
[who] led the IDF 36th Division that was
responsible for the disengagement [from Gaza]
[said this to Jewish News Syndicate]:

“…No one in his right mind in Israel will
now agree to a disengagement from Judea
and Samaria [also known as The West Bank]
except for a few Left-wing radicals.”

“a bulls**t purity test by people who
want to appear woke but actually
slept through history class.”

“As if the occupation came right out of
the blue, that this completely peaceful
people found themselves occupied.

Forget about the intifadas and the suicide
bombings and the rockets and how many wars.”
SOURCE:
Rep. Rashida Tlaib Pushes Boycott of Bill Maher
Show after Host Calls BDS a ‘Bulls**t Purity Test’
by Benjamin Kerstein, 2019 August 18
www.algemeiner.com/2019/08/18/rep-rashida-tlaib-pushes-boycott-of-bill-maher-show-after-host-calls-bds-a-bullst-purity-test/

“How can we achieve peace if the Palestinian
people remain without a place to call home?
The answer is simple:

Jordan is already 78% of historical Palestine.
Jordanians of Palestinian origin constitute
more than 80% of the population according to
U.S. intelligence cables leaked in 2010.

The only problem is, the King of Jordan
refuses to acknowledge this.”

Your comments have nothing to do with the post. Did you at least read it?

My Tanach quotes ARE related to the post,
which is why I placed them first.

Like I said before, Israel's first step must be
the explusion of the hostile news media, then
after that, others who seek to harm Israel
can be defeated more effectively.

No Arab country would tolerate the presence of
numerous relentlessly-hostile foreign news reporters.
Neither would: China, Russia, etc, etc, etc.

Tolerance is not a virtue when it leads to
Israel and Jews being unfairly slandered.

Which pasook are you relating to? It may help with the dvar Torah I'm planning on writing for Shoftim, yes, the previous Shabbat. Cooking in my head. I gave it orally to friends yesterday, and they loved it.

In the Biblical Book of Joshua, chapter 13,
starting in the first verse of that chapter,
G*D criticizes the prophet Joshua for failing
to conquer every inch of the Land of Israel.

Then G*D gives Joshua a detailed list
of lands thay need to be conquered.

In the Biblical Book of Judges, chapter 3,
Israel's failure to conquer every inch of
the Land of Israel leads directly to:

[1] intermarriage with the local Gentiles (verse 6)

[2] worshipping the false gods of the local Gentiles (verse 7)

How is that related exactly?