Something Good: "Media" Sure Changing in Israel

Here in Israel it wasn't all that long ago, when the only time you'd see an obviously religious Jew on Israeli television news was when  one was being interviewed. Those holding the microphone were uniformly bareheaded.

In the days when I was a young mother, we'd advise each other to encourage our children to "go into the media" as careers. It was a very sturdy "double-glazed glass ceiling" in terms of both religious observance and politics. Until not all that long ago, the Israeli media was strictly secular-Left. If anyone didn't "fit in," he or she'd be relegated to technical staff at best. 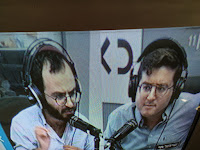 The Israeli media, first radio and later on television, shaped opinion and had a lot of influence. So when we talked of encouraging our children to break in and make careers in the media, it seemed rather revolutionary, more Don Quixote, than a practical profession like teaching, nursing, engineering and computers. 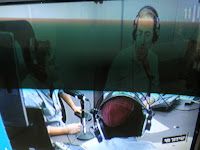 A few years ago, Bibi Netanyahu's Likud Government disbanded the old Leftist government Israel Broadcasting Authority and established a few "private," though government backed television/radio companies. Even though some of the old veteran media stars are still featured, there are many new ones. This new media revolution broke the hold the Histadrut, Israel's powerful labor union, had on the media.

Today, Channel 11 seems to be dominated by men who wear kippot, and many of those kippot are cloth, usually black, not the crocheted favored by the religiously moderate Bnai Akiva, NRP.

True change is always slow, and of course nothing will ever be perfect. But I think that we're going in the right direction. Religious women, married with hair covered in various styles, are also now seen on television even giving opinions. Gd willing I'll try to take photos and write about them, too.

Yes, I see wonderful changes and improvement here in Israel. This isn't the way things were half a century or even twenty years ago, Baruch Hashem, Thank Gd.
Posted by Batya at September 13, 2019

Since today’s theme is the Leftist-dominated
news-media, these quotes should be relevant:

“The mainstream media has abandoned
all pretense of objectivity.

Whereas in the past journalists viewed
themselves as unbiased chroniclers
of the news, their focus today is on
manufacturing it and dominating
the ensuing conversations.

A journalist’s influence today isn’t determined
by the quality or accuracy of their reporting,
but rather the size of their Twitter following
and the frequency of their television appearances.”

“I refuse to bend over backward to single out Israel
– or other things Jewish – for super-scrutiny.

I refuse to gloat, as so many in academia and
the media seem to, over Israel’s shortcomings.”

“Indeed, Palestinians rarely make an appearance
in The [Washington] Post, unless
it’s to serve as the perennial victim — and this too
is contingent on portraying Israel, and only Israel,
as the oppressor.

When Palestinians suffer at the hands of
their [own] leaders, The [Washington] Post
is nowhere to be found.”

SOURCE:
article by Sean Durns, 2019 March 6
The Media Only Cares about
Palestinians If Israel Can Be Blamed
www.algemeiner.com/2019/03/06/the-media-only-cares-about-palestinians-if-israel-can-be-blamed/

“But the Western press shows little proclivity
for reporting on topics that might cast the PA
[Palestinian Authority] in a bad light.”

SOURCE:
article by Sean Durns, 2019 March 6
The Media Only Cares about
Palestinians If Israel Can Be Blamed
www.algemeiner.com/2019/03/06/the-media-only-cares-about-palestinians-if-israel-can-be-blamed/

“[Rashida] Tlaib, a high-profile member
of Congress, has been caught following a
virulently anti-Semitic Instagram account
— and using her official account to do so.
Yet the press couldn’t be troubled to report it.”

“I am so tired of the extreme media bias.
And yes. It is extreme. Never before has
it come into such stark focus as it has
under the Trump administration.

There is hardly any mention of the name Trump
without either an overt or disguised negative comment.

It almost doesn’t matter who is reporting it.
The attitude is the same. Anything the President
says or does is bad. No matter what it is. Even
his accomplishments are spun into the negative.”

SOURCE:
The Truth about Trump and Illegal Aliens
by Harry Maryles, 2019 July 12
http://haemtza.blogspot.com/2019/07/the-truth-about-trump-and-illegal-aliens.html

“New York City has seen a huge increase
in anti-Semitic attacks, largely carried
out against religious Jews in Brooklyn.

Most of these incidents are ignored by the media.”

SOURCE:
Anti-Israel Hate Marches Continue
in Europe and the West
by Laureen Lipsky 2019/6/6
(Laureen Lipsky is a pro-Israel
advocate living in New York and the
founder of Taking Back the Narrative.)
www.algemeiner.com/2019/06/06/anti-israel-hate-marches-continue-in-europe-and-the-west/

“Many of the people deciding what you
will read and see from here [Israel] view
their role not as explanatory but as political.

Coverage is a weapon to be placed
at the disposal of the side they like.”

SOURCE: An Insider’s Guide
to the Most Important Story on Earth
by Matti Friedman, 2014/8/26, Tablet Magazine
www.tabletmag.com/jewish-news-and-politics/183033/israel-insider-guide

Batya, I always read you blog posts;
and even if I didn’t, then other people would.


If you re-read my little messages,
you will find that their theme
is the same theme as your blog message:
the media.

That shows that I did read you blog post.

Batya, I always read your blog posts;
and even if I didn’t, then other people would.

If you read my little messages,
you will find that their theme
is the same theme as your blog message:
the media.

That shows that I did read you blog post.