"Gevalt" For Sure- Lieberman Holds Israel by The Neck

Recent history here in Israel is showing Avigdor Yvette Lieberman to be a dangerous anarchist. His political machinations has brought down the government, and since then no working coalition has been formed.

For some inexplicable reason, many Israelis vote for him which has been perpetuating the political chaos. The results of yesterday's elections aren't any better than that of the previous ones. It's very dangerous for the large Arab party to be in the coalition, and Gantz's Blue and White have painted themselves in a corner by refusing to work with Likud leader Binyamin Netanyahu.

All those who voted ל for Lieberman are as guilty or even more so for strengthening and legitimizing him. Lieberman has a chokehold on Israeli democracy, on every citizen, Jew or Arab, Torah observant or totally secular. I have an easier time accepting people's vote for Leftist parties than for those who voted Lieberman. 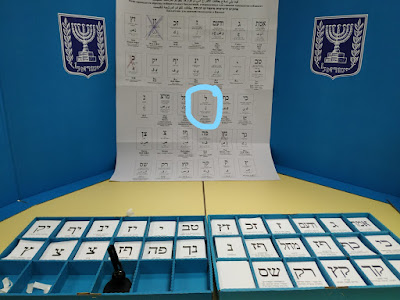 We are in the midst of the Jewish Month of Ellul, the time for more intense Teshuva, Repentance. I pray that those who have been elected to serve us, citizens of the State of Israel, in the Knesset will find it in themselves to work together, reject hatred and dangerous vows. May they form a strong coalition for the betterment, security and sovereignty of the State of Israel.
Posted by Batya at September 18, 2019

"His political machinations has brought down the government"

Apart from the grammatical inaccuracy, the statement is also lacking in truth. It wasn't Lieberman who brought down the government, it was Bibi. Bibi decided to call for an election. Bibi did not do the honorable thing of going back to Rivlin and allowing the President to ask Ganz/Lapid to try and form a government.

What shocked many was that Lieberman was true to his word and stuck to his guns. Well, fancy that. Bibi could learn something from him.

If Gantz had been able to form a coalition he would have presented it. One doesn't need Rivlin's permission to negotiate.
Lieberman changed "teams" alnd policy

"If Gantz had been able to form a coalition he would have presented it. One doesn't need Rivlin's permission to negotiate."

He never got the chance. You can negotiate all you want, but it's of no value unless you have the imprimatur of the President asking you to perform a government. Ganz/Lapid waited. Bibi decided... well, what did Bibi decide? He decided that elections - with all the cost and disruption - were necessary. They weren't.

Instead, Bibi did the cowardly selfish thing and people are prepared to overlook that and blame Lieberman instead of facing the truth. Bibi was scared, among other things, that Ganz/Lapid would go to Likud and say: "Let's do a unity government. Only one condition: no Bibi." That's why Bibi did this loyalty pledge afterwards.

(It may not save him now, regardless.)

You mean Lieberman stood up to Bibi and wouldn't budge on his principles. It was known before the last election that this was Lieberman's stance. Those key parts did not change. It's thanks to Lieberman's stance that Bibi's true character was exposed, again.

It's time for the real likudniks to stand up to the bully Bibi and get rid of him.

This most recent incident, which in the future
may be known as "the Avigdor Lieberman incident",
fills my mind with despair and disgust.

Many people will will not like what I am about
to say, but I will say it, because it is true:

The reason why Israel has so many problems
is because the land is filled with many
categories of people who DO NOT BELONG THERE
and should not be there.

It is not only Arabs and Muslims who do not
belong in the Land of Israel and should not
be there. Other categories of people who
should NOT be living anywhere in the land
of Israel include:

* All atheists and Leftists and Socialists
* All gays, lebians, and their allies
* Reform and Conservative Rabbis
* Christian missionaries [who target Jews]
* Chareidim who condemn "the Zionists"
* Neturei Karta and Satmar
* Chareidim who do not work or serve in IDF
* Thieves and con artists and lunatics
* Those whose main goals are money and power
* news reporters who hate Israel

The ideal inhabitants of the Land of Israel
are: Modern Orthodox Religious Zionists,
Chardalim / Hesder Yeshivah Jews,
and secular but very traditional Jews.

If all inhabitants of the Land of Israel
fit into these three catrgories, then
many of Israel's problems would be solved.

But because the land is filled with many
kinds of people who do not belong there,
Israel's problems become many and unsolvable.

On June 1, 2006, former New York City
mayor Ed Koch wrote an opinion piece
in the [New York] Times titled:
“The New York Times’ Anti-Israel Bias,”
asserting that “the British Broadcasting
Corporation [BBC] and the New York Times
consistently carry news stories and editorials
that are slanted against Israel and
sympathetic to the Palestinian Authority and Hamas.”

“Hamas’s strategy is to provoke a response
from Israel by attacking from behind
the cover of Palestinian civilians,
thus drawing Israeli strikes that kill
those civilians, and then to have
the casualties filmed by one of
the world’s largest press contingents,
with the understanding that the resulting
outrage abroad will blunt Israel’s response.

This is a ruthless strategy, and an effective one.

It is predicated on the cooperation of journalists.
One of the reasons it works is
because of the reflex I mentioned.

If you report that Hamas has a strategy
based on co-opting the media, this raises
several difficult questions, like:

And has this relationship corrupted the media?”

Ellis, you're rather inexperienced and naive. I repeat:
Negotiations do not need the "permission" of President of Israel. It's just a ceremony. Bibi has negotiated with the basis of his coalition already. They just need a couple of deserters from another party. Maybe the Levy's will convince Orly that she should return to Likud rather than being in a coalition with Arabs and Leftists. One or two from B&W or even Lieberman would do the trick.
Bibi is an extremely experienced and brilliant politician, though I do have disagreements with his policies. Gantz, Lapid and crew are out of his league. The Arab MK has more experience and smarts than they do.

You are twisting my words. I didn't say he needed the permission. I said that the authority of the President made a difference, and Gamz/Lapid waited for it, rightly or wrongly.

"The election campaign ensued when Prime Minister Benjamin Netanyahu went for broke by dissolving the newly elected 21st Knesset, instead of returning his mandate to the president and allowing another Knesset member to try to form a government in accordance with the law. "

This is to highlight that nothing that you posted answers the point I did make. Let me remind you:

"Apart from the grammatical inaccuracy, the statement is also lacking in truth. It wasn't Lieberman who brought down the government, it was Bibi. Bibi decided to call for an election. Bibi did not do the honorable thing of going back to Rivlin and allowing the President to ask Ganz/Lapid to try and form a government."

I will give you one thing, though. You are right that Ganz, Lapid and co are out of Bibi's league - when it comes to honesty and honor.

Mr Cohen, you are entitled to your opinion. But if the host of this blog had any standards, it would be deleted for the hate speech it truly is.

Ellis, simple math. If Gantz had put together a coalition, they would have voted down the law to call new elections. Obviously he couldn't pull it off, so the law passed. Really, it's that simple. I've been here a very long time.

Ellis Simpson: What about the hate speech of
Arab members of Knesset who publicly call for
the complete destruction and elimination of Israel?

What about the hate speech of the BDS movement,
which attacks only *** ONE *** country: ISRAEL!

Ellis Simpson: What about the hate speech
of textbooks which teach young Arabs
and Muslims that Jews are enemies
and evil and pigs and monkeys?

Ellis Simpson: What about the hate speech
of Arab leaders who publicly praised
Adolph Hitler from the 1930s to the 1970s?

Ellis Simpson: What about the hate speech
of many Arab leaders who publicly called
for all Jews in Israel to be driven into
the sea, from the 1940s to the 1970s?

If you are honest, you wll admit that
Arabs and Muslims are the champions
of hate speech.