Unlike previous elections, so far, even though the voting stations will be open in about 24 hours, I've noticed relatively few signs and potential trash. There could be a simple reason, money or lack of it. The political parties and wannabes just can't find the money they had a half a year ago for the first Israeli Elections 2019, 5779. Generally loans are taken out, or the government provides political parties with a certain amount, which will be covered if the party wins enough seats. If they don't win the required amount, then the money must be returned... somehow.

Yesterday I posted about the Israeli political system, which is rather misunderstood. Likud and Blue & White are, davka, taking advantage of people's ignorance. To simplify and repeat:


In Israel we don't vote directly for a Prime Minister. We vote for lists of potential Knesset Members. The party leader who can negotiate a ruling coalition of at least 61 Members of Knesset becomes Prime Minister of the State of Israel.

People, especially those raised abroad, ask if having districts would make it easier to form stable governments. My answer is a firm "NO."

There are two very simple reasons for this:


It may help to return to the one-time "experiment" of two ballots, one for Prime Minister and the other for the Knesset. This sort of system exists in Israel in municipalities. People vote separately for the mayor and city council members.

Sometimes the mayor and his party's council members do well, so he has an easy time making a working coalition. Other times, like Moshe Lion, Mayor of Jerusalem, the winning mayor doesn't have council members from his party, and he/she must make a coalition with those who had wanted him/her to lose. A skilled politician can pull it off.

Politics is the art of compromise. People/politicians have to work together for the good of the people/country/city/state.

Whether prime minister, president, governor, mayor etc one must be fair also to those with different opinions, not just to supporters.

I'm voting Yemina, and davka one of the reasons is because the various factions now running together for the Knesset have shown that despite their "bad history," they are willing to work together. Even though many times I've said that I wouldn't vote for NRP-Jewish Home, this time I am, since they're working with politicians I support. Nobody's perfect, especially in politics. We have to vote and then pray that the winners will do the right thing for the good of the country. 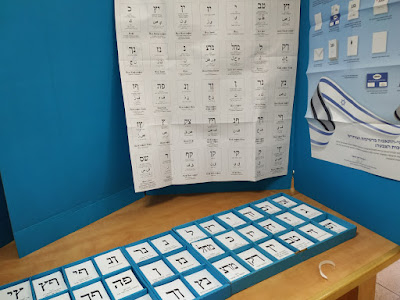 I'm crossing my fingers and eyes that Israel gets the government it needs.