Obviously this isn't easy. Being the Prime Minister of the State of Israel isn't a simple matter of just making decisions and giving orders. Actually the army isn't good training for national politics.

It's not enough for an Israeli political party to get the most votes to make them the ruling party. When Zippy Livni headed Kedima, it got more votes than Binyamin Bibi Netanyahu's Likud, but she couldn't gather/negotiate a ruling coalition. Bibi could and formed the government as its Prime Minister.

And a few months ago in the first Israeli Elections 2019, 5779, Likud scraped by with the most votes, but not enough MKs were willing to join a coalition with them.

If the polls are right, Israeli Elections 2019, 5779, #2 will have the same basic results as #1. This can go on forever, because the political parties on the Left, Center-Left, including Avigdor Lieberman's,  have centered their platform on "Anyone but Bibi" as a coalition condition. Considering that polls consistently show Netanyahu as most popular for the position, we have a problem.

To be truly successful in Israeli politics, one must be willing to work together and compromise. Gd willing, enough of those elected to the Knesset will put their egos aside and do what's best for the State of Israel. 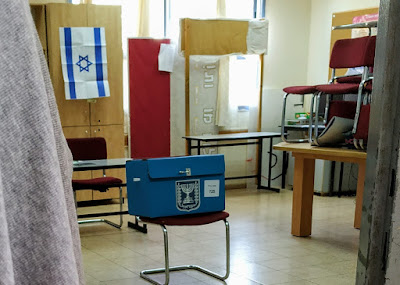 This is the most clear and concise overview of Israeli politics I've seen.

Do you think things would change if they got rid of party lists and you voted for individual people like in congressional House districts?

Thank you. I'm glad you find it useful.
I don't think districts would help. The truth is they would be horrendous. Did you ever hear of gerrymandering? Israel is a small country, and districts would be a nightmare. What we do need is to limit the Judicial, which has become dictators insisting that judges can cancel laws of the Knesset.
We should have a legal balance of power, like in the USA.

Coalition system allows deals to be made with the devil so to speak.

System must be changed if there's anyone man enough to change it.

Infighting on the right mostly by PM may very well bring about a leftist government.

Are the mayors of cities in Israel elected directly,
like American elections, or do citizens vote
for a party, like the elections for Knesset?

Mr. Ali Adi
[an Arab who lives in Israel] said:

If you ask any one of them [Arabs] during
a casual conversation, even the biggest hater
of Israel will tell you honestly that they
prefer a conflict with Jews to a conflict
with other Arabs, which would naturally
result in brutal, unchecked bloodshed.

The Arab citizens of Israel will admit
that they prefer the Israeli government
to an Arab one, even if from their
comfortable positions at Israeli universities
they prefer to call it “the occupation.”

Mr. Ali Adi
[an Arab who lives in Israel] said:

“The truth, which the entire Arab world
already acknowledges, that the Israeli army
is the more humane and considerate than
the Arab armies, fills me with pride.”

“Whilst the Israeli Defense Forces are not
perfect, the obsession of focusing on them
despite being the most moral and professional
army in the Middle East is very strange.”

Mayors are elected directly, and the city council members by lists, like the Knesset. Then the mayor has to make a working coalition.