Jewish Theology integrales two rather contradictory concepts, The Power of Gd and the Gift He gave us, Free Will. I don't have time to delve into this complicated relationship now, but today I witnessed some of Gd's Powers.

As I was doing some things in the living area of my house, which faces east, south and west, I noticed that the sky to the west was getting dark. That could mean rain. And then suddenly I saw a strange flash to the east. I began to wonder if that had been lightning, when suddenly I heard a boom, thunder. So retroactively I knew that it had been lightning.

A few seconds later I had already taken out a siddur, Jewish Prayer Book, and said the appropriate blessings: 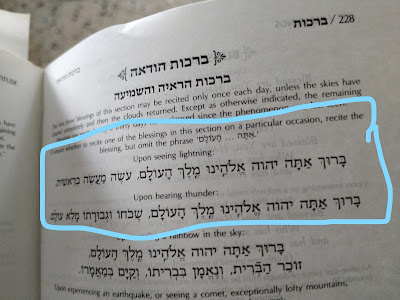 We humans like to think that we're clever, but we can't fully control the weather. Here in the Land of Israel, Gd uses the weather as a barometer to show approval or disapproval of our behavior. Some years we have perfect quantities of rain at the best times, accompanied by the right heat and cold facilitate miraculously blessed harvests. There are other years when lack of rain, too much or badly timed rain, along with damaging temperatures turn our Land into a barren wilderness. This doesn't happen by chance.

May we succeed in following Gd's Commandments correctly and deserve the best weather for the fertility of The Land of Israel.
Posted by Batya at March 05, 2019

Today, I said: “HASHEM, I thank You and
praise You for giving me the light and
warmth of the sun, all of the days of my life,
always in correct measure, always for free.”

Rabbi Avigdor Miller ZTL ZYA often
compared this to a landlord who
gives free heat to his tenants.

Today, I also said: “HASHEM, I thank You
and praise You for giving me an apartment
to live in where the windows let in much
sunlight. I thank You for not placing me
in a basement apartment with very little
or no sunlight.”

Whoever helps those who perform
righteousness is also worthy of life.

Whoever helps those who perform
evil is also worthy of death.

“Whoever feeds other people [especially the poor]
will receive a blessing that causes him to feel
satisfied with his food, in addition to wealth.”

42% of French Muslims between from age 18 to 29 believe
that suicide bombings against civilians can be justified.

35% of British Muslims between from age 18 to 29 believe
that suicide bombings against civilians can be justified.

26% of American Muslims between from age 18 to 29
believe that suicide bombings against civilians can be justified.

SOURCE: By the Numbers, a YouTube video
by Raheel Raza, 2015 December 10
www.youtube.com/watch?v=pSPvnFDDQHk
http://zalmi.blogspot.com/2016/02/a-brave-muslim-woman-tells-us-what-were.html

The Myth of the Tiny
Radical Muslim Minority:
(a YouTube video by Mr. Ben Shapiro)

Where Are the Moderate Muslims?
(a YouTube video by Mr. Hussein Aboubakr and Prager U)

Amen, Ki Yehi Ratzon! Blessed be G-D, Praised be Hashem! For His Goodness is Everlasting! We are now at the time of history where everyone will soon see the Hand of H' in all things. In the end, HE is in control of everything! Awaiting His servant, Moshiach Ben Dovid tzdkeinu, speedily in a blink of an eye!