Clever of Bibi to Schedule Maximum Time Before Elections

A reminder that here in Israel we don't vote for Prime Minister; we vote for a political party's Knesset list. And it's the party leader who can hammer together/negotiate a coalition who becomes Prime Minister. That's why more and more polls are stressing the "bloc total," Right versus Left. Considering that some Center parties wouldn't agree to be in a coalition with Extreme Left and/or Arab parties, that limits Leftist options. To fully understand Israeli Elections and Politics, one must have a good head for strategy and tactics, like in chess. Binyamin Bibi Netanyahu is a champion at this. I'm sure he has it all calculated in his mind; none of this (except the indictment threat, maybe,) is by chance.

Week by week, Likud is doing better in the polls. Remember that polls are just polls, but consistent trends should be examined. To keep track of the possible results of the upcoming 2019 Israeli Knesset Elections, just trends of course, I suggest checking out Jeremy's Knesset Insider periodically, once a week would be enough.

Now, why am I not surprised that the Likud is doing better in the polls?


Historically, the Likud has always done better in actual elections than in pre-election polls. There are just a few weeks left before the 2019 Israeli Elections. That's a long time in politics, especially here in Israel. 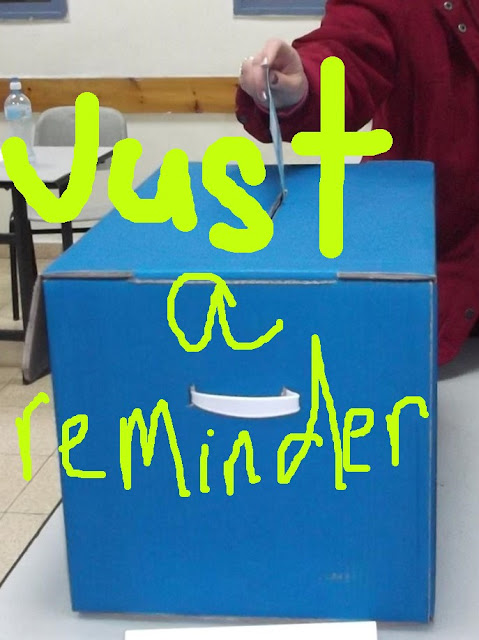 *anyone who is on the Right of the political spectrum finds "moderate" to be rather offensive and illogical adjective. Kahalon is calling himself the "moderate right."
Posted by Batya at 8:18:00 AM

This is what irritates me about politics. "Moderate" is not a dirty word, and neither is "centrist."

When the Right (or the Left) claims that being a moderate/centrist is a bad thing, maybe we should ask "What is the opposite of 'moderate'?" (That's right, the correct answer is "extremist"!) This is the problem with politics in the USA, which makes me want to say, "A plague on both your houses."

At present in the 2020 presidential election, we have a disagreeable character on one side and a group of leftists on the other. (Please spare me the argument that Trump is great because of the pro-Israel policies; any good he is doing is neutralized by the tweets, dishonesty, and other things he does.) Maybe a "moderate" will emerge on the other side. I am still hoping for a primary challenger so that Trump may be forced to do what LBJ did and withdraw from the race. Failing either of those, I am prepared to repeat my vote of 2016 and write in someone else. I recognize that this will not prevent Trump or a "progressive" getting elected, but hopefully both extremes will be destroyed in 2024 and we can get past this disgraceful era in American history.

Now, returning to the Israeli side of things: Bibi, as good as he was, should have been subjected to term limits so that he recognizes that he has a limited amount of time to do what he needs to do. The good thing is that the Israeli public is more center-right than they used to be and the center-left will need to improve its game in the future. I'm just hoping that the Israeli government does the right thing and doesn't listen to the rest of the world as much as they seem to.

Considering that Israeli and American political systems and election laws and governments are totally and utter different, I don't see the point of your writing about America here. The only thing in common is that a voter must either choose the best of the whatever or the least bad of whatever.

But for you to write:
"...Bibi, as good as he was, should have been subjected to term limits..."
That's outrageous. If Israelis and then Members of Knesset want to change the law and limit the years one can be Prime Minister, that's one thing. But it's not for you to say, and it's certainly not to be worded as a personal law for Bibi.

First, my point is that those who say that "moderate/centrist" is a dirty word are wrong. What I was objecting to is your comment at the end, which stated, "*anyone who is on the Right of the political spectrum finds 'moderate' to be rather offensive and illogical adjective." This is only true if your "anyone who is on the Right" is the opposite of "moderate" (i.e., extremist). I suspect that was not the impression you wanted to convey--I think you are indeed "conservative" but not extreme. That is the problem with both Israel and America (which may have accounted for my opinion about the American elections, which I fully realize may or may not be relevant to Israel)--I believe that most people are indeed moderate in their politics, and those who are more to the Right or Left are not extremists. But too many in both countries ARE extremists. And they are giving us the choice America had in 2016 and I fear they will be giving us in 2020, the choice between a president that I agree with regarding some of his policies (and disagree with a lot of them) but personally think is an embarassment to the country, and a "progressive" who will turn the country even more leftist. In my opinion, that is no choice at all.

In Israel, Bibi has done some very good things and I am sure some things leave something to be desired. But even Bibi is not indispensable, and to label him as such presents a problem with government. I realized that I misspoke in my last paragraph because what I said was not intended to limit the language to Bibi; I believe that public servants must recognize that they are in office for a limited time and should retire from the stage at some point. Bibi will have served longer than any other prime minister in Israel's history, probably because the voters have confidence in him and because his opponents have not succeeded in forming the coalition to remove him. I favor term limits in general. The last thing anyone in Israel would want is a prime minister who stayed on the stage too long. I am afraid that this is what is happening with Bibi. I hope that corrected the bad impression I made in the last post.

You didn't get the Kahalon reference. He is campaigning as "moderate right." I call his "moderate" wimpy, because he wants to get right votes, but doesn't have the guts to call himself right, which is phony/wimpy for sure.

Israeli PMs don't have the same power as American Presidents, because of the coalition politics. And because of the fragility of that elections aren't held on a specific day and year. That makes your proposal of limitations much more difficult. If a law was passed that a PM in office over x years can't run for Knesset or be in #1 spot, then a sitting PM would call elections just before that cutoff to extend office for the maximum plus. Or he/she could then arrange not to be #1 but further down and still run things. Bibi's multiple cabinet posts is more problematic.