Guest Post: Letter From an Israeli Mother on The Gaza Border

We live within 7 kms of the Gaza border fence. We don't live as close as some and for that we are lucky and thankful but we are close enough and being in the center hear all the noise from the north down to the south and the activity in the Sinai from the Egyptian army.

An abnormal way of life has become 'normal' for us. When there is quiet, life is fine but always in the back of one's mind is the realization that it will not last.

My husband was evacuated from the Sinai as a result of the Camp David Peace Accord with Egypt in 1982 and we built our house before the Israeli withdrawal from Gush Katif. Why do I mention this? because when we built there were no rockets and we, along with a few other families, built the our mamads* according to the legal requirements which means that they are the size of a broom cupboard. We can't sleep in it, standing room only. Ok for when there's no rockets but a nightmare when they rain down and you have to scramble from bed at 02:00 wake and shift the kids and do it all in less than 15 seconds. !!! What about disabled people ?? Two of my girls suffer from living here. The middle one suffered for years from Compulsive Stress Disorder and the youngest has other stress related symptoms.

The kids here are terrified from the balloons** and bedroom windows have to be locked and securely covered by curtains so that there are no cracks because they are terrified of seeing faces at the windows.......as they explained .....the terrorists come at night. Whenever we go anywhere the first thing they do is check out where the shelters are and if they have enough time to reach one should there be an alarm. A few years ago when I took my youngest to visit her grandparents overseas she stunned us by one day asking quite matter of factly as we were driving along:


"Imma, the bus stops....where are the bomb shelters? Where do they hide when the rockets fall?"

We were lost for words.... and then explained.

Last summer my youngest went to a Bar Mitzvah pool party, and we had to run the gauntlet and fetch her as rockets were falling all around us and kipat barzel*** sent out above our heads as we drove home. She was shaking like a leaf but didn't say a word. So yes the kids are traumatized here and sadly many of them don't know any other way of life. Years ago the school would take out the odd child from class to have a tipool (therapy session.) After Tzuck Eitan**** the situation was so dire that they decided to treat the kids by class. They would start the day with meditation. Kids wet their beds, siblings sleep together and nightmares are frequent.

Even in the quiet times there is noise but I think one of the most unforgivable things is being lied to by the security forces, being told that nothing happened when clearly something has. When rockets have fallen and they've denied it. We aren't stupid and people talk. The lack of information is frightening and frustrating. We are told (sometimes) on a need to know basis which doesn't help a parent when their kids are all over the area with friends. 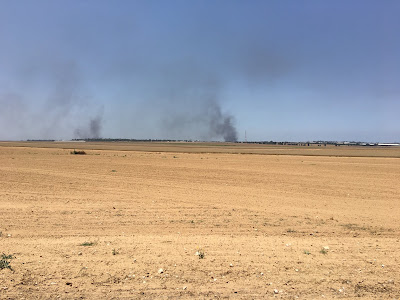 *shelter/secure room
**For the past year, Arab terrorists from Gaza have been launching balloons and kites equipped with incendiary devices that have caused serious fires here
***Iron Dome defense system
****Operation Protective Edge]
Posted by Batya at March 16, 2019

Batya, thank-you for posting this open letter. Mary-Ann's letter hits home. It is written from a mother's heart...the anger that her children are suffering, that there is no end in sight..only bandaids are being done by our government.

When you live with the drone buzzing, helicopters and jets overhead watching, booms and more booms, a quiet day becomes eery...and we say it is too quiet.

Miriam, I so understand you and pray that we will have a government with the guts to do what's right for all of us. Share this blog post if you think it's true. I'm so glad that Mary-Ann is willing to tell her story.

Indeed, Former U.S. State Department official
Alan Keyes has argued that by changing the
terms of the Mideast debate from a political
issue between Israel and the Arab states
into a human rights complaint by occupied
Palestinians, the PLO has won an undeserved
political and diplomatic advantage.

Palestinian political organizations
now present themselves as human rights
organizations, and the media fall for it.”

New Jersey Imam: Palestinian cause is ‘Islamic,’
but must be marketed as ‘humanitarian’:

“It is virtually impossible to get the United Nations
to condemn any Arab terrorist group or state for
any attack on Israel or Jewish institutions.

Yet there is an eagerness to condemn Israel,
whether Israel is right or wrong.”

“The world may have to deal with
terrorists in order to save lives.

But the moral scandal is that in addition
to simply dealing with these terrorists,
much of the world has HONORED them.

The standing ovation accorded to Yassir Arafat
– the architect of international terrorism –
by many UN [United Nations] representatives
in Geneva in 1988 will live in infamy.

The willingness of world statesmen – including
the Pope and other moral leaders – to treat
Arafat as a person deserving of tribute
is beyond moral comprehension.”