Star of The Purim Story Esther, Not Haddassa

I have my "differences" with the accepted Biblical commentaries in a lot of issues. And I see things in the linguistics of the Tanach/Bible in ways that others don't. It's hard to say why, but for sure, one of the main reasons is that I didn't grow up with the "Torah stories" that most others grew up with.

Almost everything I know about the Tanach/Bible I learned as an adult. Add that to the fact that my mind does work a bissell differently from others, and you shouldn't be surprised.

Unlike EVERYONE ELSE, I read the line I've circled here as:

Standard commentary of her name is that her Persian name was Esther, but her real name was Haddassa. 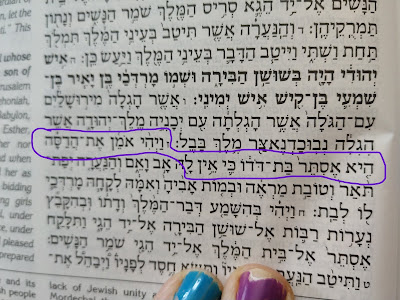 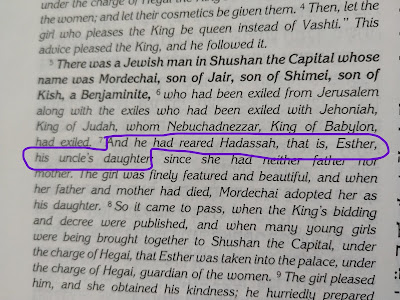 It's a well known fact that there's a Hebrew root to the name Esther סתר.  סתר S-T-R means "secret." And the same linguistic root להסתיר lihastir means to hide.  Those who claim the root to be Persian, say it's "star." I have a question for you:


When are stars out?

Did you answer "at night"?

Think again, please. Stars are always surrounding the earth. It's just that daylight hides them. Clouds and rain hide them even at night. Yes, stars are mostly hidden.

Not only did Esther hide her national identity when in the palace; she hid her intelligence, too. Ester was a woman of secrets, just like her name in Hebrew, Esther סתר , אסתר S-T-R means "secret."

There's a linguistic theory that Hebrew is the root of all languages. What do you think?
Posted by Batya at March 21, 2019

Refuting the Fans of Vashti:

Vashti was "the elephant in the room." but that's a topic for a different blog post.

Hebrew is the root of all languages. H' created the world with the Hebrew language, H's language.

THE WORD: THE DICTIONARY THAT REVEALS THE HEBREW SOURCE OF ENGLISH Paperback – December 1, 2001
by Isaac E. Mozeson (Author)

The author posits that many words in English (and Romance languages) are actually of Hebrew origin. I haven't read it in a long time but one example he gives is machsan, a storage room, as the source of magazine (container for ammunition) and magasin (French for a store). He may have written more than one book on this topic, and they have been criticized for making what the critics think are unreasonable connections, but it makes sense when you read it.

Sure does, thanks.
merkaz (center, like business/market center) and market