Bibi, Is He Guilty? 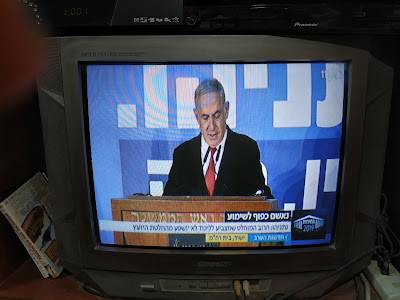 After at least a decade of searching, investigating and more, the legal authorities here in Israel think they have found something crooked in the way Prime Minister Binyamin Bibi Netanyahu conducts the government. Attorney general Mandelblatt has announced that the Prime Minister will be indicted.

Do I think he's guilty? I'm not really sure. I'm not a legal expert, nor a judge. To be honest, I don't think I'm qualified to give an opinion, and I don't think that the media is qualified. We're not judging after hearing both sides. And we aren't judges.

Netanyahu isn't getting due process at all.

The media and too many others consider themselves judge, jury and executioner.

Honestly, I'm suspicious of the entire collection of "charges," because never before had there been such efforts to search for a crime, just to get the Prime Minister out of office. They couldn't beat him in elections, even when the Likud got fewer votes than Kadima. Only Netanyahu was capable of forming a ruling coalition, and since then, he's still the Prime Minister.

Quite a number of years ago, when Ariel Sharon was Prime Minister, I went to a hearing/trial in the Supreme Court, in which he was accused of corruption. And this was a real charge, proven, but the judges let him off, claiming that although it looked and smelled dirty, he was allowed to do it. None of the charges against Bibi are as serious as that one against Arik.

A lot of people think this whole indictment business is to take votes from Likud and convince people to vote for Gantz's party, the one with multiple heads. I hope the Likud voters aren't so stupid, but they're Likud voters...
Posted by Batya at February 28, 2019

Of course, you should be suspicious. It's so obvious between what's going in the U.S. and in Israel, on charges that make no sense and just before the Israeli elections. Duh! Also, all media (not only the Israeli & American media) are 'left', so in the interim, they have the upper hand by slanting everything their way.
If it walks like a duck, talks like a duck, it must be a duck! Anyway, it's all leading to Geula. H' is in control.

awful
And he doesn't want Bibi to have proper defense either.