One of the most veteran of Israeli political parties, those that predate the Establishment of the State of Israel, is NRP (Mafdal) aka Jewish Home Party. It's traditionally Center Left, religious, but not too extreme, Zionist and always in the ruling coalition.

In the early days of the State of Israel, their aim was to establish and strengthen the Mamlachti Dati, State Religious School system and add Jewish Tradition wherever possible to Israeli life and law. In many ways they seemed closer to mainstream Labor Party, because both had kibbutzim and moshavim to protect and coddle.

As time went on, and especially after Israel's totally miraculous victory in the 1967 Six Days War, the NRP began to change. Its first generation raised in the State of Israel became the most enthusiastic in Israeli society for settling the Land liberated in the war and Israel's increased security and prosperity enabled more and deeper Torah learning.

Children and grandchildren of old NRP leadership and graduates of the Mamlachti Dati, State Religious Schools began looking to emulate the heavy Torah learning of the chareidim, even establishing full-time Kollel programs and chareidi-like elementary and high schools for boys, where the graduates wouldn't be qualified to pass Bagrut tests for a high school diploma, which is necessary for university and certification in most vocational studies.

At the same time, in the political sphere, they've established numerous other political parties, more religious and Right ideology then the venerable NRP aka Jewish Home Party.

That's why  unlike Likud, descended from prestate Revisionist Herut, the veteran Labor Party and the chareidi parties, there's no internal competition or primaries for the leadership role in the NRP aka Jewish Home Party. There's a leadership bankruptcy; its graduates have moved on and away.

Every few years a new "leader" is recruited from various other occupations or parties. The NRP backroom mafia controls the party and all the property that has been in the "family" for probably close to a hundred years.

The words behind NRP are "national religious party." Honestly I, like Naftali Bennett and many others, some who vote Likud, are ideologically against a party that labels itself as dati, religious.

I believe that we all, no matter how many and how carefully we keep Gd's commandments, must work together to govern and steer the State of Israel. I look for a political party with vision and commitment to the Torah, Land of Israel and the entire Jewish People.

Gd willing, I'll be voting for the New Right, although I honestly don't like the name Bennett and Shaked chose. And it's reassuring to me that Caroline Glick has chosen to run for Knesset in the New Right. Gd willing, we'll see her in the Knesset soon. 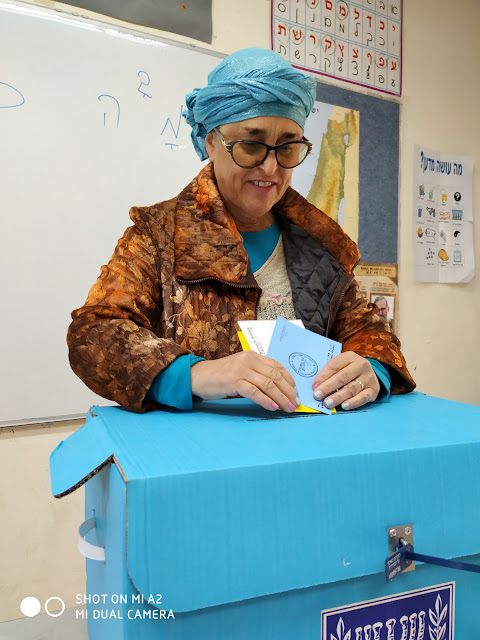 Batya, you are certainly making the correct
to choose a political party with commitment
to the Torah, Land of Israel and the entire
Jewish People. I hope that your choice helps.

The king responded emphatically in words that
Roosevelt would not repeat when he talked to
reporters on the [war ship] Quincy*:

“It was perfectly terrible.”

[King] Ibn Saud retorted that the Jews
should return to live in the countries
from which they had been driven.

CHRONOLOGY:
Franklin D. Roosevelt was President of the
United States of America from 1933 to 1945.

At a 1937 [CE] lecture to
the British Foreign Ministry,
the King of Saudi Arabia said:

“Verily, the word of Allah teaches us,
and we implicitly believe this…
for a Muslim to kill a Jew…
ensures him immediate entry into Heaven…”

PERSONAL COMMENT:
Notice that those words were spoken BEFORE
year 1967 CE and BEFORE year 1948 CE.

If you want the truth about Israel
and the Middle East, then do not waste
your time with the FAKE NEWS
of The New York Times and the
Israel-bashing mainstream-news-media.

You are going to love when Likud B trades Shiloh away to the PLO . Because Bennett doesn't stand for anything other than being a minister.

Meanwhile BY had plenty of competition to replace Bennett . Rav Peretz certainly is as qualified as it comes even if he isn't a career politician. Some of us think that's a good thing

Bennett certainly loves Rav Peretz the new head of BY. Bennett begged him to be on his list but Rav Peretz turned him down before he was chosen to be BY leader .

Gd willing, it will all be for the best.