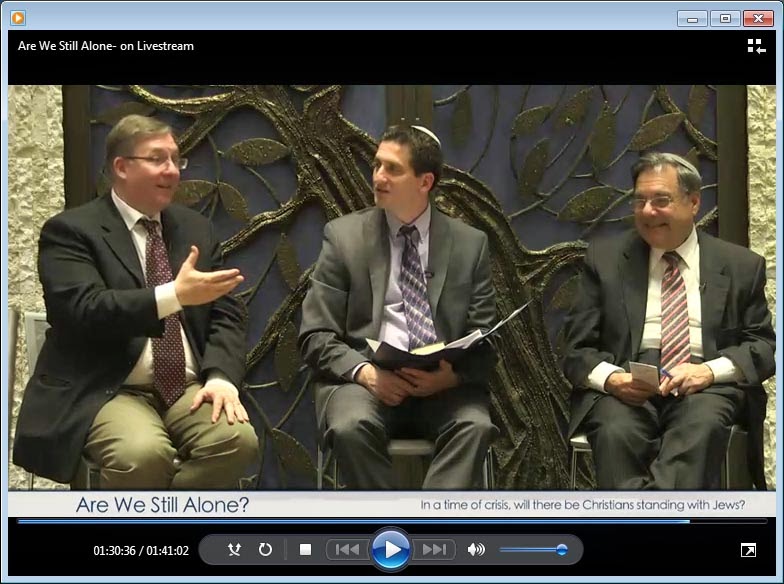 Chief Rabbi of Efrat, Shlomo Riskin, recently shared the podium at New York’s West Side Lincoln Square Synagogue with Christian missionary Joel Rosenberg in an interfaith theological exchange sponsored by Ohr Torah Stone’s Center for Jewish-Christian Understanding and Cooperation (CJCUC).
The event was a coup for Rosenberg who openly and enthusiastically supports the proselytizing of Jews.
Even more disturbing is the enormous promotional boost Rabbi Riskin has given to major missionary organizations such as Chosen People Ministries (CPM), which closely rivals Jews for Jesus in the race to convert Jewish souls
Rabbi Riskin’s interfaith discussion clearly demonstrates is that there is a direct and disturbing link between dialoguing with evangelical leaders and empowering the missionary agenda directed at Jews....more
Posted by Ellen at April 09, 2014

Ellen, tizki limitzvot!
I'm totally horrified at this story. How can an Orthodox synagogue sanction such an even to give an opportunity for a dangerous missionary to spout his Jesus beliefs?

Hasn't it been obvious for quite a while that Riskin has made 180 degree turn to apostasy? This latest is just proof positive. Our Sages have predicted that apostasy will overtake the world at keitz hayamim and that many of the Rabbis will be of the Erev Rav. We are now in danger not only physically but spiritually, which is even worse. There are many, many unaffiliated and unknowledgable Jews who can easily be influenced and manipulated. Mercy, mercy.

Riskin is certainly not of the Erev Rav. He is not one to keep the Torah to himself but to share it. The strict definition of the Erev Rav is those who keep the Torah to themselves. Anyways, I finally listened to the video and frankly don't see why we have to have such hatred toward him, nor towards Joel. What bothered me in this is first that both sides do not represent the historical messianic movement from 2000 years ago. If they both represented it correctly, they both would be following true sadducean Judaism (opposed to establishment sadduceeism). I think Riskin is misrepresenting Isaiah 53 as the people watching the videos won't know that historically that verse is to do with the messiah and not Israel but the rabbi's changed it to that to get the xtians off their backs. He is certainly correct in saying that we are all from the Creator of All but he misrepresents the messianic movement in the saying to love your enemies as yourself which has no historical accuracy according to the Dead Sea Scrolls and is a pharisaic insertion since Rav Shaul (corrupted to Paul) was the founder of xtianity and not the Essenes/Nazarean/Masada sects. I have for years taken the stance that both sides are in extreem error concerning this issue as I am also aware of what is held in tight lipped secrecy about the events of 2000 years ago and the supposed "Yeshua" or greek corruption "Jesus". At the end of the day, if both sides where informed we would be bringing the real Derech like the Creator of All had given via His prophets. We can only hope we see this to come in our life times, preferably sooner then later. One more point, in the talk, R Riskin stated it's against the Right of Return law that to believe that JC is divine is the problem. Believing a Sadducean Torah observant Jew was MBY is not against any halachah we have today or even before. The accusations against the greek jesus are well justified in the Talmud and have nothing to do with the Sadducean historical movement. If he is or was MBY and according to Michah 5:1-2 he will have his comings forth (read in Hebrew), there is no problem except that we should be like the Karaites in practice. That is the real battle on the Jewish side, the boogie man jesus is no threat, the historical Jew certainly is. Sad we cannot see this.

Again, Shilo denies the Torah. We received both the Written & Oral Laws at Sinai. He is obviously a Karite or some kind of secret Xtian. Riskin is of the Erev Rav and/or just doesn't belong being a rabbi and misrepresenting Torah. His mentor, Rabbi Soleveitchik, z'l, must be turning over in his grave. This is an extremely serious matter and why his ouster hasn't been brought up is strange.

Show me one place that I deny the Torah, even though it was lost for some 50 years and rediscovered. But besides that point, remember the story of Abraham and his 3 guests. You don't know who God will send now, do you? Ah, even better, remember the story of Job, whom did God punish for the loshon hara? Ya, thought so, so please, say as much as you like, bring it on!