A bit of vocabulary.  Chutzpah and nebbishkeit are antonyms. 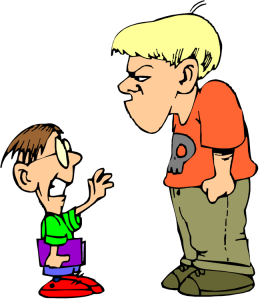 Israelis may be known for their "chutzpah," but the truth is that we don't stand up for ourselves. We're more nebbish than chutzpadik. Simply put. As a country we're a bunch of wimps. A good example is the fact that instead of protesting the chutzpadik offense that all countries do against Israel by insisting that Jerusalem isn't our Capitol City, successive governments have accepted the insult as only true nebbichs would.

The theme of the just ended Passover Holiday is that we celebrate no longer being slaves to Pharaoh in Egypt. But by letting foreign countries place their embassies in Tel Aviv, Herzliya or any city other than Jerusalem, we're still slaves to Pharaoh. It's just that we're no longer living in Egypt.

Here and there we hear sounds of proud Jews trying to break out of this acceptance. A family of Americans, the Zivotofsky's  who immigrated to Israel have taken their protest to the American Supreme Court.

The US Supreme Court Monday decided to hear the case of an American born in Jerusalem, once again taking up the sensitive issue of the status of the contested city, according to AFP.
The justices will hear argumentsin the case in the fall before deciding on the constitutionality of a 2002 law that directs the State Department to give Israel as the country of birth in passports of Americans born in Jerusalem.
At the center of the struggle between the Congress and the presidency is Menachem Zivotofsky, who was born in Jerusalem in 2002 to two American parents.
His passport says "born in Jerusalem" but his parents want Israel added to the place of birth, putting them at odds with the State Department.
Jerusalem is Israel's capital, but the international community repeatedly refuses to recognize it as such.
In 2002, president George W. Bush signed the bill declaring Israel as Jerusalemites' nationality into law, but he added a signed statement condemning it as unacceptable interference in the president's powers to conduct foreign policy.
In March 2012, the top court ruled that the Zivotofsky suit was legally admissible, without pronouncing on the underlying issue.
After the case was thrown out twice - most recently, in June - the Court will decide this time whether the president alone has the authority to say who Jerusalem belongs to, in the eyes of the United States.
The Obama administration argued at a hearing in November 2011 that to list Israel as the country of birth would be tantamount to recognizing Jerusalem as the capital of the country. (Arutz 7)

Too bad the Israeli Government isn't spearheading the protest law suit.
Posted by Batya at April 21, 2014

Email ThisBlogThis!Share to TwitterShare to FacebookShare to Pinterest
Labels: Jerusalem

It's harder to take Egypt out of the Jewish people than it was to take us physically out of the that hell-hole over 3,000 years ago, isn't it?

As the first step to an antidote, I believe we should all be reading the likes of Daniel and Tziporah Pinner's compilations and divrei Torah based on Rav Meir Kahane's writings (zz"l!). So far I've been able to find them consistently on the Tomer Devorah web site; I haven't looked, but there might be a site dedicated to such literature.

There's a lady whose blog is dedicated to RMDK (is there already a rav nicknamed the Ramdak? If not, this could be Rav Kahane's handle.) and she seems to publish fairly regularly - and I just found out that she has another one dedicated to Dr. Michael Ben-Ari's writings (this is who we voted for in the last election, right?).

Have you heard of Barbara Ginsberg? If so, then the links above are for your readers' sake. We desperately need to grasp The Jewish Idea (pun intended) and internalize it before we can rise, the Lion of Judah, proud and free from Mitzrayim, inside and out.

Or, before "they" get the best of us. We must choose, and quickly.