Today in New York there will be the Salute to Israel Parade.  Just the name of it brings back such vivid memories.  I marched and danced at/with/in all the early parades from the first until 1970.  There were years I did it twice, rushing back to the start off.  First I marched/danced with NCSY and then I'd march with Betar.  I had such energy then.

There's only one picture I have of myself participating in the Salute to Israel Parade. It's the one that the Jewish Agency used in its poster to advertise the following year's parade. 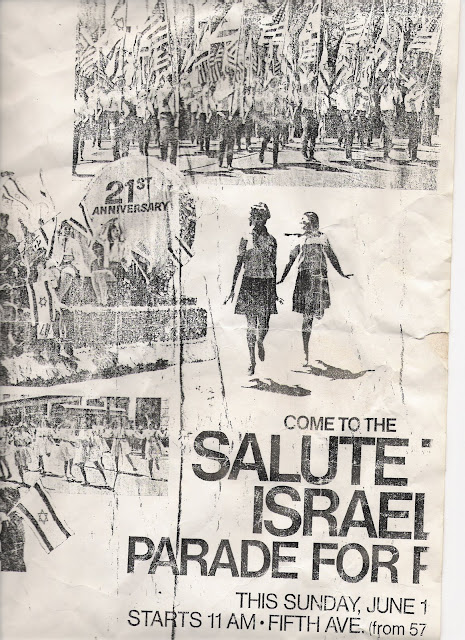 Can you guess which dancer is me?  I'm still very close friends with the friend I had danced with then.  She also lives in Israel, not far from me.  We even sometimes take the same Bible classes.

Just recently she confided that it was the Israeli folk dancing which I had gotten her involved that brought her to Zionism and Israel.  We were privileged to represent NCSY in the Fred Berk Leadership and Choreography Course, 1967-68, which was held in the 92nd Street Y each year.  The following year we led the NCSY Dance Group in the big Folk Dance Festival that Fred was in charge of.

When I look back on my life, these events were definite highlights. All of the young Zionist activists took part in one way or another. We got to know each other in person.  In those days there weren't any cellphones or computers, internet etc.  If you corresponded you used paper and stamps.  Even phone calls were expensive.  There weren't any security concerns.  Terrorism was unheard of.  It was truly a great time to be growing up in.

I was a young high school student when the parade first began.  I traveled to the city with friends from my NCSY chapter of the Great Neck Synagogue. They were all older than me and possibly I was the only girl in the group.  They also knew their way around Manhattan and navigated, finding where we started to march.  And when it was over, they made sure I got home safely.

Almost fifty years later, Jews from all over are still marching in the parade, which makes me very happy.  Enjoy!  But remember, marching in the Salute to Israel Parade isn't a substitute for making aliyah and living in Israel.

The message of this week's Parshat Shavua, Torah Portion of the Week is that you're not supposed to think of the pros, cons and difficulties.  Just come here and live in the Land G-d promised us.
Posted by Batya at June 02, 2013

The Israel Day parade started after I came on Aliya but the Israeli Dance festivale began when I was active and I participated in the Betar Danc group twice. I posted a picture of our dance group on the the Betar blog
Steve