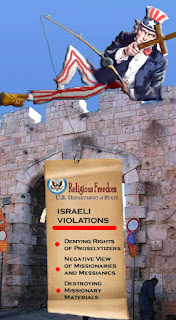 The U.S. State Department has released its annual International Religious Freedom Report. While not a severe offender of religious freedoms, the Jewish state did fall short of the standards that have been set by America, an overwhelmingly Christian nation. It appears Israel didn't make the grade when it came to accepting "messianic Jews", welcoming missionaries and embracing proselytizing.


According to the report, the population of "Messianic Jews" in Israel has apparently taken a quantum leap over the past three years – growing from 10,000 adherents in 2009 to 20,000 in 2012. JewishIsrael reviews this State Department report and takes a look at those intriguing demographics.


This post is a required, albeit pathetic and painful read for any Jew concerned about the state of Israel and Jewish continuity....more
Posted by Ellen at June 05, 2013

Ellen, thanks for posting. We mustn't hide from these unpleasant facts.