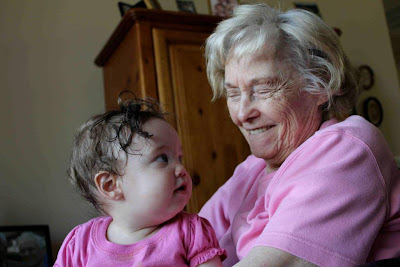 Yesterday was my mother's funeral at the Oakland Jewish Center section of the New Montifiore Cemetery.  It was conducted by a Rabbi  ?Klein and with the participation of Rabbi Dale Polakoff of the Great Neck Synagogue. My many cousins plus some friends and other family members attended.  My brother, sister and I really appreciate it.  I was told that it was considered a large group.  I guess it was, because Rabbi Klein had asked if there would be a minyon of men, and we certainly had that.

The cousins, from both sides (to tell the truth, a stranger would not have been able to tell if they were my father's or mother's nieces and nephews) really enjoyed Rabbi Polakoff's description of my mother as "feisty."  This was a great tribute to their Aunt Shirley whom they obviously adored.

Observing my absolutely wonderful cousins in action together, I have no doubt that they all are a tribute to my parents, aunts, uncles and grandparents who produced this wonderful family I am privileged to be one of.
There aren't many families as amazing as mine.

My Cousin Howard opened his home to us for the post-funeral shiva.  He set it up as a proper shiva home, covered the mirrors and had water for ritual hand-washing outside the door.  One is supposed to wash one's hands when leaving a cemetery, but since he knew that we'd be going into the cars straight from the gravesite, he was prepared.  My sister-in-law brought low chairs from her Young Israel of Scarsdale, and my friend Rose made sure there was the traditional "seudat havra'ah" for the mourners to eat.  There was also kosher food for all, since many traveled long distances and we were all mourning.

It was truly a celebration of who and what my mother was and no doubt my mother would have greatly enjoyed the "party."

Afterwards I got back to my sister-in-law's and on old friend from Great Neck came over to "linachem."  His parents had been very generous to me in the years I had needed a place for Shabbat and holiday meals.  We hadn't seen each other for over forty years, but have had occasional email contact.  The Jewish World is amazing.

The day before, on Tuesday, there was a funeral ceremony for my mother in Phoenix Arizona, which my father was able to attend.  My NY daughter was there, too and stayed with my father after my sister and her husband traveled to New York for the burial.  Some of my mother's former caregivers joined the friends my parents had made in a Conservative Scottsdale Synagogue my parents have joined since their move from New York.  Also attending were many friends of my sister, her family and more.

Today the shiva continues at my sister and brother in law's home, then to JFK and my flight home to Shiloh where I will continue sitting until I get up on Tuesday morning, G-d willing.

I must add that the eulogy my children wrote and had read by their Aunt Debbie was beyond beautiful.

Batya you should go from strength to strength.

May the Almighty comfort you among the mourners of Zion and Jerusalem.