Counting The Omer, Easier Than Trying to Calculate The End of Corona Lock-down

Here we are a week before Passover aka Pesach, and this used to* be the season when we'd sign up for various reminders to help us remember to Count The Omer, Sefirat Ha'Omer, the seven weeks, forty-nine 49 days between the second night of Passover and the Eve of Shavuot.


*Why did I write "used to?"
I wrote "used to," because today when most everyone has some sort of cell phone with alarm clock, you can just set your phone to be your daily alarm. 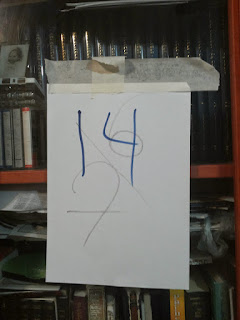 This method is fine on week nights, but it doesn't work Shabbat and the eve of the last night of Passover. I came up with a simple method that works for me.
I hang up a sign across from where I like to sit in the living room. As you can see, before  Shabbat or the holiday, I write the number of the Omer I must count. I've found that to be a very reliable reminder.

Counting the Omer was one of the most difficult mitzvot for me to observe in the early decades of my being Torah observant.

When I became religious in the mid-1960s, there was no reminder system. Only men who went to the synagogue every night to doven/pray Ma'ariv with a minyon had it as their easy to remember routine.

I didn't succeed in counting the Omer until our son-in-law came on the scene and signed us up for reminders with the cell phone company he was then working for. It was around the same time email reminders had begun, but I didn't check my email as often as I do now. So email wasn't the best, just better than nothing.

Maybe I'm the only one who has already lost track of how many days/weeks we've been on this corona lock-down, living with what was once unimaginable restrictions. Not only don't we know when it's going to end, we're constantly being warned that the noose aka restrictions maybe getting tighter.

Most people can adjust to something difficult when they know how long it will last. But even with all the complicated computations and guesswork the experts have been coming up with, there are too many unknowns to factor in for any accuracy. Another issue is that the virus is affecting various countries differently. 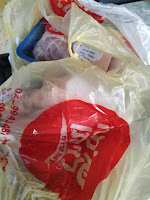 We must combine strict obedience and "letting go." There certainly is an inconsistency in that. But that's how we must live in the near future. We must make our efforts, mask ourselves when outside and stay inside as much as possible. Instead of doing our own shopping and choosing the choicest fruits and vegetables, we send in our orders and thank the staff of the local store. It's a new life for us.

Trust and faith are all we can control.

Chazal, our sages tell us that the plague, epidemic, which caused the death of thousands of Rabbi Akiva's students ended Shavuot. That's one of the reasons we count the Omer until then.

Gd willing we'll celebrate the end of this modern plague במהירה בימינו bimhaira biyameinu, speedily in our days.
Posted by Batya at March 31, 2020