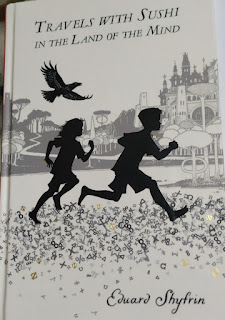 I'm going to tell you the truth. I almost didn't take up the offer to accept Travels with Sushi in the Land of the Mind by Eduard Shyfrin for reviewing. It was described as a children's book that explained "maths and quantum physics" in a unique way. In all honesty, that's neither my specialty nor interest. I have grandchildren who are more talented and knowledgeable about sciences than me, so I had an ulterior motive for taking the book. As soon as I finish writing this book review, I'm going to find a way to pass it to them.

To my great enjoyment and utter surprise, I discovered that Travels with Sushi is much, much more than a children's "science book." It's a fable about the Jewish People, our enemies and the Bible. There's no way I'm wrong about this. Many of the characters have names and characteristics similar to biblical figures. Yes, it can't be an unintentional coincidence. In a addition, they play similar roles in both narratives.

Aaron and Stella, the brother-sister pair are the main characters. They love and eat sushi, but they don't eat it with shrimp. Hmm what does that make you think of? This Aaron, like the biblical one, partners up with a sibling. But instead of brother Moses, he works with sister Stella. Could the name Stella come from the biblical Esther? Maybe.

Travels with Sushi includes lots of magic, which should attract the Harry Potter fans. Aaron and Stella end up in a mysterious frightening, dangerous world after eating special sushi. There's a Supreme Ruler and a Book and the "good guys" being attacked; BTW they don't eat shrimp. Aaron and Stella must rescue them before their memories are stolen.

The reader follows Aaron and Stella around as they together and separately outsmart the Black Queen and the Mushi. The White Queen is the good one, and they're helped by other characters, including Josh and Valeb. Could they be modeled and named for Joshua and Caleb of biblical fame?

Pretty much locked down in my house because of the corona virus, I see streets, parks, playgrounds here in Shiloh are hauntingly empty. This short passage from Travels with Sushi was very apropos to what's going on around me.

I must say that I truly enjoyed reading  Travels with Sushi. For those of us attracted to character and plot, the physics and math don't stand out. It's suitable for older children, precocious younger readers and makes a great book to read to your children, too. I also recommend it for an EFL book report, so it'll be sent to my grandchildren, Gd willing.

Here's an interview with the author Eduard Shyfrin and the facebook page.

Intriguing review! Looking forward to finding this one!

You'll love it. Ruti, you know that I can't lie. All I wrote was the truth.

And what does that have to do with my book review?
There is so much Torah learning being done via the smartphones now. Those rabbis against such use are endangering not only their followers but all who come in contact with them.

Great review Batya. I am also not a fan of science fiction or fantasy, but I really enjoyed this book. It was so clever.