Letter to The Jerusalem Post: Shocked by Yaakov Katz's Op-Ed 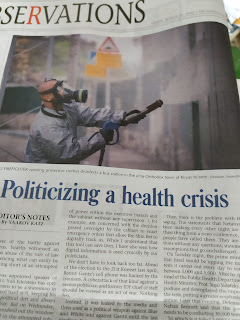 
From the first few lines of Yaakov Katz's op-ed in Friday's paper, I was sure he'd mention the old standby "Don't change horses mid-stream," but instead he attacked the Likud and not Blue and White. Maybe Katz doesn't quite understand the seriousness of the coronavirus crisis that is endangering the State of Israel, and most of the world.

Compared to most countries, Israel is doing an extraordinarily good job in keeping things under control, bringing back stranded citizens and caring for the ill. This isn't a time to change governments, even if Blue and White had received many more Knesset seats than Likud. We all know that not only didn't they receive as many as Likud, but Gantz had promised not to add the Joint List to his coalition. The only ones playing politics in this time of national and international crisis are the supporters of Benny Gantz.

If Gantz and crew really cared about the State of Israel at this point they would have immediately gone to Prime Minister Binyamin Netanyahu and offered to join an Emergency National Unity Government in any capacity needed for the sake of the citizens and residents. But they haven't. They and their followers are the ones playing politics, caring only for their personal egos and ambitions.