If Gantz Had Been Able to Form Coalition, He Would Have

I know I said that as was taking a break from politics, but...

Many Israelis, media etcetera are saying that Prime Minister Binyamin Bibi Netanyahu should have officially gone to the President to declare that he couldn't form a coalition, so that Blue & White's Gantz-Lapid party could try. But the truth is that Gantz and his crew could have been negotiating all along with other political parties. They didn't need an official "green light."

The scenario could have been that Gantz had enough MKs lined up to give him a coalition, and then during the vote to disband the Knesset, Bibi and the Likud would have lost the. There wouldn't be new elections, because a majority of MKs would have announced that they wanted to join a coalition with Gantz-Lapid/Bogie/Ashkenazi.

One big reason is that forming government coalition is much harder than even electing over thirty MKs. You have to be a strong, wily politician. Lapid is the most experienced politician in the Blue & White Party, but he can't hold a candle to Bibi, Tzachi and the other Likud leaders.

I hope that Avigdor Lieberman fails to reach the minimum to be in the next Knesset. He's not a team player. I don't trust him. The new patchwork quilt NRP is a mess, too.

I'd really like to know what you think, thanks. 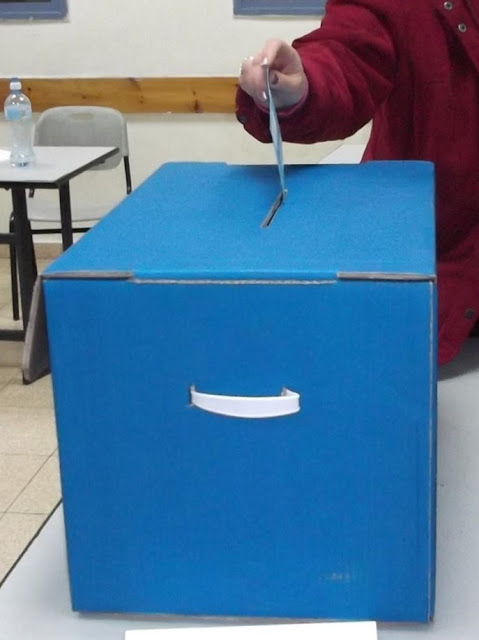 Maybe I should go back to hybernating.
Posted by Batya at June 05, 2019

When, when - WHEN, will you stop putting your faith in these stupid men whose sole agenda is to put you and the rest of Yesha into concentration camps once they begin their next phase of establishing the P state? What will it take? Why no mention of the fires in Achia? That should be your focus. Escape plans, another. What is happening in Erev Rav country will happen, voting is ridiculous - when everything is pre-planned, fixed and the outcome is known. 2 days away from Matan Torah and where is Shilo in this? Talking about Lieberman.

There are two levels to the world, and we have to deal with This World and humans, with their faults. We aren't Gd's puppets.
Gd will react to how we deal with each other. Only Gd is the Judge.
Hishtadlut, we must make every effort to do our best and not just condemn others. Opting out with words like yours is not what Gd wants from us.

I know it's not in our hands anymore. Surely you can see this.

Arabs and Muslims should not be there.

Leftists and secularists should not be there.

Gays and lesbians should not be there.

Jewish converts to Christianity and Reform Rabbis should not be there.

Crooks and con artists should not be there.

Jews who only care about themselves should not be there.

Charedim who refuse to serve in the army or work should not be there.

Charedim who attack Jewish soldiers and Zionism should not be there.

Jews who want to give-away our sacred land to our enemies should not be there.

May the All-Mighty and most-merciful G*D-of-Israel
decree that all Jews should soon see the day
when the sacred Land of Israel is freed of
all the wicked and unworthy people who ruin it.

Only then can there be true peace and security and prosperity.

From The Jew by Rabbi Aryeh Kaplan:

Other faiths begin with a single individual
who claims to have a special message
and gradually gathers a following.

His followers then spread the word and
gather converts, until a new religion is born.

The only exception to this is Judaism.

Here G*D gathered an entire people,
some three million strong, to the foot
of Mount Sinai and proclaimed His message.

Every man, woman and child heard G*D’s voice,
proclaiming the Ten Commandments, and thus
a bond was forged between G*D and Israel.

This was an event unique in the history of mankind.

ONLY JUDAISM began when
MILLIONS of people personally witnessed:

[1] the Ten Plagues in Egypt

[2] the splitting of the Red Sea

[4] 40 years of miracles in the Sinai wilderness:
the Clouds of Glory, the manna, the Well of Miriam, etc.

I agree about Lieberman. I would love it if we were to have seen the last of him, but unfortunately I’m guessing that with our Russian population that probably won’t be the case. He hasn’t come up with a reasonable idea yet imo (land swaps?!). I just wish we had politicians that cared more about the country than they do about hanging onto their Knesset seats.
Wishful thinking.

Mr. Cohen, everyone *should* be in EY, because that's how it is. It's called a reality and for whatever reasons - all are spiritually rooted - it was DEEMED by Hashem that this be the consequence of our actions.

The Land is being wrested from our hands because apparently, based on the calculations made Above, we're just not deserving enough to dwell in it, let alone take possession of it. So it's a free-for-all. That's not to say that those who would divvy it up as if it was theirs to do so, selling it to the highest bidder (Rome/Edom) are not going to be judged (and are) severely. Seems like just as the generation of the Midbar had to die out, so to will ours, then the new generation (perhaps those with a new heart) will be able to enter and possess and dwell safely within all borders of EY. It is the division among us that has caused so much strife, it will only be Unity (one heart devoted to Hashem) that brings us home.

Mr. Cohen, Jews can repent. Don't give up on them. Gd doesn't. That's the promise after the Flood.

SS, Gd willing he won't get in, but really up to the voters.

a, Gd willing more repentance and life will be better.

Batya: A slight correction to your response to Mr. Cohen. You said all of his no-no's should be in the Land, guess you really meant to say that only the Yehudim to be in the Land (who will eventually do teshuva) as that is G-D's Command (except for those who hold the 7 Law of Noach and may remain in the Land).