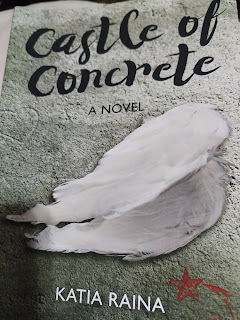 Castle of Concrete by Katia Raina is an amazing and well-written novel about life in the late twentieth 20th century during the fall of the USSR and how it affected a Jewish teenage girl and her family. To be honest, I think it's a mistake to market it as Young Adult fiction. The genre of Castle of Concrete is really much broader.

I'm far from a young teenager in age, and I found Castle of Concrete fascinating. During that very same era, we had hosted and "adopted" a number of Soviet Jewish immigrants to Israel, not that much older than the characters depicted in the book. The young men who spent a lot of time with our family had finished military service in the USSR, and some had even begun university studies before making their homes in Israel. Not all were happy about their family's decision, but staying alone in the deteriorating and collapsing Soviet Union wasn't an option. I could see similarities with Sonya, Katia Raina's main character.

We meet Sonya as she reconnects with her rebellious mother, after spending most of her childhood in the care of her Jewish grandmother in Siberia. Sonya has to make a new life for herself, and in the process she tries to reinvent herself from the quiet nerdy, always good girl, to a daring, rebellious attention-grabbing teenager. Sonya is Jewish from her mother, though she inherited her non-Jewish father's looks. Soon she'll have the option of choosing which nationality to put on her identity card.

Castle of Concrete follows Sonya as she experiments with different identities and behaviors in her new life in Moscow with her mother. Instead of being the conscientious student, Sonya begins to rebel and get interested in boys. She has to decide whether or not to identify as a Jew, especially since her boyfriend is a Russian nationalist and antisemitic. In the background to the usual teenage angst we are made aware that her mother is hoping to be able to move with Sonya to New York, where they can have a better life.

I enjoyed reading Castle of Concrete, which is very nicely written and sincerely hope that Raina's writing a sequel in which we'll follow Sonya and her mother in their next new life, this time in New York.