The Mishkan and Post-Temple Judaism

Yesterday in Matan during the lecture by Yael Leibowitz, in which she described what we'll be learning this year, she mentioned that after the destruction of the Holy Temples, Chazal, our sages had the task of defining a Judaism which could survive in Exile and without a Temple. It had to be "portable."

After close to forty years living in Shiloh, it's no surprise where my mind went. I saw a chiastic structure framing the period between Joshua's leading the Jewish People into the Land of Israel and the Destruction of the Second Holy Temple which preceded the long two thousand 2,000 year Exile into the Diaspora.

The bridge was the Mishkan, Tabernacle, especially when it rested, stood temporarily in Shiloh for close to four hundred years. Prayer, more specifically communal, consisted of sacrifices and took place in and around the Mishkan. The Mishkan was first constructed according to detailed plans communicated by Gd right after the exodus from Egypt.

The Mishkan was made to be portable, and during the forty years the Jewish People were "in transit" between Egypt and the Holy Land, it could be moved. In the Holy Land, it then "rested" in Shiloh. Besides the stone foundation, it was still constructed of wood, fabric and animal skins. That's why it is so difficult to ascertain exactly where it stood in Shiloh. No stone walls remain, no matter how far deeply the archaeologists dig.

When we were a united tribal nation, the Tabernacle was enough to keep us together, build shared experiences, but with time the Jewish People needed more.

In the Holy Land, first the Mishkan was the center for religious pilgrimages. Later, during the Davidic Dynasty, it was replaced by the Beit Hamikdash, Holy Temple in Jerusalem. And then, after the destruction of the Second Temple and the dispersion of the Jewish People, a new version of Judaism had to be developed. No longer did Gd send specific instructions. It was in the hands of knowledgeable people, the Sanhedrin.

The Sanhedrin developed/decided on a Judaism that has kept us a People for two thousand years. And now, thank Gd, we have returned to our Land. As Jews return from all corners of the world, it's time to erase our differences and build the Third Holy Temple in Jerusalem, Gd willing, speedily in our days... 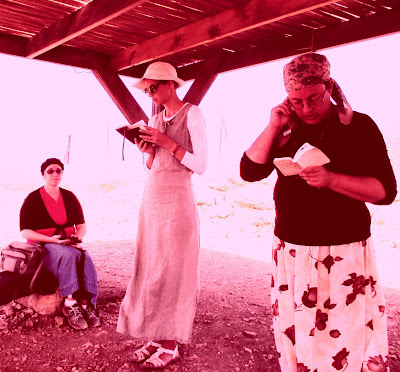