Despite the modest plans, way back when, for Shiloh's growth and development, Shiloh and the surrounding area has been miraculously fruitful. Today there are close to one thousand 1,000 Jewish families in Shiloh and various yishuvim (towns) and hilltop from Givat Harel, just west of Highway 60, and going east until the Alon Road. This doesn't include Eli to the north, Maale Levona to the west or Amichai, which at present as a different government status.
For the second time, there will be elections for a "local council," which would have the authority to plan joint projects and even eventually make changes in how all of the various communities are governed. This council will consist of nine 9 members, and there are two parties competing.

I'm supporting עמ- Emek Shiloh, because its leadership sees the future of our region as a vibrant growing municipality, in which the existing communities need to join as one governing unit to the betterment of all. We shouldn't be competing, otherwise we will just end up strangling, slowing down or limiting our growth.

The outgoing council was dominated by people who wanted to preserve the status quo, keep the various communities separately governed. And those same people are hoping to continue; they are running on a competing list.

Last night, the עמ- Emek Shiloh candidates met with some of the English-speaking community in Shiloh to explain the situation and their plans.

It's time for change. We need to unite for a better future, Gd willing. 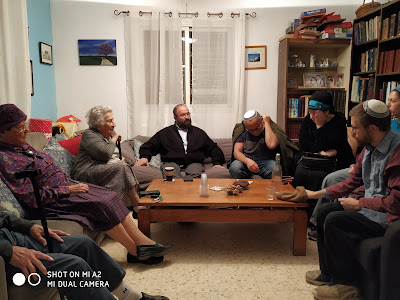